This is a photo from Cousins Bonnie and Wayne. 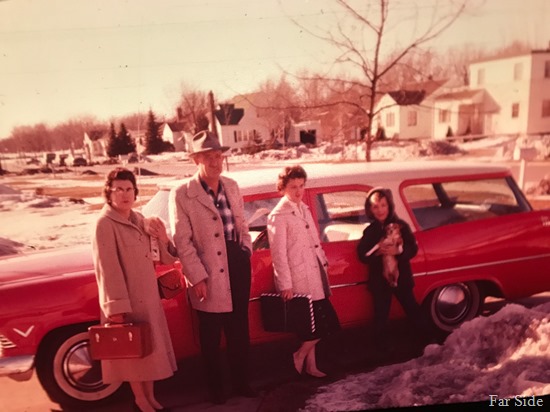 Grand Forks North Dakota about 1958.  The car we think is a 1957 Plymouth Fury Stationwagon. The photo is taken in the driveway of Jim and Esther’s home (Marvin’s brother and his wife).

Evelyn has her cosmetics case ( I think either Trica or Jennifer has it now) her purse and something else in her hands?  Marvin is wearing one of his favorite flannel shirts under a wool coat, Janice has been shopping, she said “We often went shopping when we went to Grand Forks.” Far Guy is holding Muggy.

Far Guy said “I forgot  all about that car, my Dad didn’t have that one very long.  We might have been in Grand Forks for Easter that year.”

Oh how I adore these types of pictures!! I just got done going through all of my old pictures here, putting them in plastic photo holders to one day (hopefully) scrapbook. It took me a couple days to go through all my photos, old & new, and I tell ya.... by the time I got done I was more than a little blue. Looking at my parents when they were alive, life in the 1950s when it was (for me!) carefree & happy... made me long for the good ole days. I guess that's what we 60-somethings do when we age. *lol* I can now understand it. Blessings~ Andrea

Great picture bringing back a time long ago. The car really dates the picture. :-)

I remember the cosmetics bags. One was included in the luggage set I received as a HS graduation gift.

Another time! Such fun to see the old pictures. :)

Cool old cars. I also like to see the clothing styles.

Last year for fins...hubby said 1959.
I showed him the car because he loves
old cars!

Funny that Far Guy's sister still likes to shop. Maybe we don't change all that much through the years!

Funny! Both your Blog and Larry's mention 1914. Coincidence? Or some other fated invisible hand!....( dramatic theme music) He found a calendar from that year. ( 104 years old!) I totally love that picture of that car. Right out of an old catalog. Awesome.

That car is pretty amazing! My uncle had a similar one, really long and with a third seat in the rear that faced out the back window. My sister and I loved to ride there, so far away from the grown ups, in our own little world. My mom had a "cosmetic case" like that for travel. It was always full of the whole family's stuff as my mom didn't really have a lot of cosmetics to put in it.