There were high clouds but you could still see the sun was out. We ran errands in town.

People were standing outside with various glasses.  One group at the Farm Supply store had welders helmets.  In one parking lot people were pointing and they had no glasses on at all, the sad thing was they had small children with them.  We saw one guy stopped in his car with his sunglasses on…just stopped in the middle of the road. 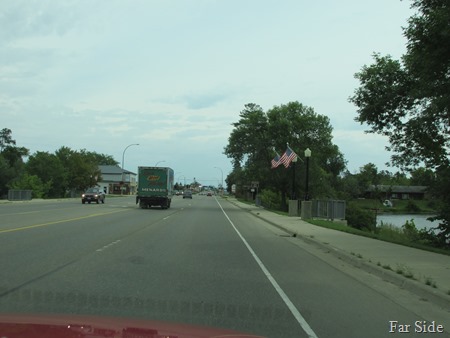 As it got darker more car lights came on.  It never got really dark, but it was a twilight.  Far Guy called it an eerie twilight. 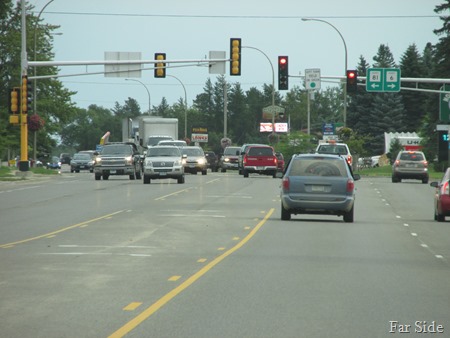 I waited in the car while Far Guy ran one errand and watched people watch. 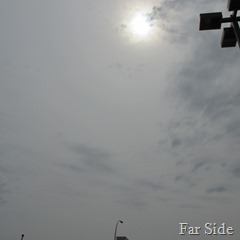 I hung one of my old cameras a point and shoot out the window and took a photo. Nothing much to write home about. We were supposed to be at 80% of the eclipse.

The only other solar eclipse that I can recall was in July of 1963.  My baby brother built a box to view it, I may have helped him…I do not recall that part, the design was probably something out of the old Grit publication.  I recall people saying back then that you could look through old negatives…negatives were larger back then.  It was a sunny day back in 1963 as we sat out in the yard waiting for the eclipse to happen. It seemed darker than it was today, but perhaps that is because it was a sunny day….and I was younger and more easily impressed.  That time it was 78% and the main track was up in Canada.

My brother was at home in Oregon for the eclipse yesterday, they had special Tshirts and glasses…it looked like they might have been having a Total Eclipse of the Sun party.

Labels: 1963, Carey and I, Childhood memories, not much happening here

You saw more than we did. It was overcast here with very few breaks. It did get darker and once we did get a very short glimpse of the eclipse.

I was able to see the total eclipse from my backyard - it was spectacular!

Oregon was one off the hot spots for Totality watching. It was fun to see on the news. We had so many dark clouds here that I didn't think much about stepping out at work. But I found five minutes and gave it a try. One large black could parted and I got a glimpse at just the right time. Didn't notice much darkness because it was so vercast with very dark clouds. Still...fun because the energy was very different at the college yesterday. Glad you got out.

We had 99.3% totality here in Portland. I took a break from work and went outside to watch. Pretty darned amazing!

I took a few pictures too. It was 93% here, and got pretty dark...an eerie dark. The shadows were the most amazing thing to me...little crescents everywhere. We waited too late to buy solar glasses and could not find any.

It was cloudy here so I wasn't sure if the little extra darkness was from the clouds or the eclipse. Sure--today it is sunny--LOL! :)

I remember looking though old film negatives at the solar eclips also!

I adored the "old" Grit newspaper. Now it's a glossy magazine and just not the same. I don't subscribe anymore. xoxo

We had only partial here, I set up with my cameras in the barn and poked the cameras out to take photos. Not very spectacular but kind of fun.

Here in Missouri we were in the path of totality so we got to see the eclipse at 100%. It was an amazing experience! It was beautiful and kind of eerie all at the same time!

We were at the epicenter and it went completely dark for one minute. While it was eerie twilight-ish the mosquitos came out and bit us! It's the only complete eclipse I've ever been fortunate enough to see in my lifetime. Pretty cool!

It's scary that people were looking directly at the sun for more than a second. I hope no damage was done, but it is likely that there will be. There was plenty of warning to be prepared. I bought my eclipse glasses from Amazon weeks ahead of time.

We were about 86%. I just finished blogging about it. We didn't have glasses, and then thought of the welders mask too late, but I did see pictures that a friend took with the right filters or lens or settings, and it was pretty cool! The thing I found most fascinating was the temperature drop, although the weird shadows of the leaves were pretty neat.

It was much lighter at 88% coverage than I thought it would be. I posted a picture of the crescent leaves. :-)

I'm not sure what our actual coverage amount was, but it was fun and interesting regardless.