We had lotza company, many little kids (five that were five years old and under).  Mostly they were gentle and gave soft pats and hugs. 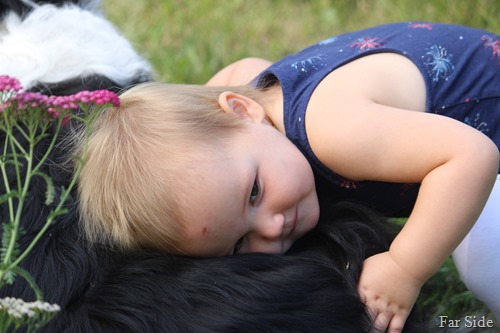 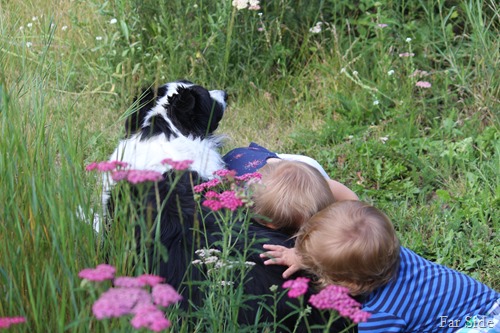 Then there was a tag team of huggers. 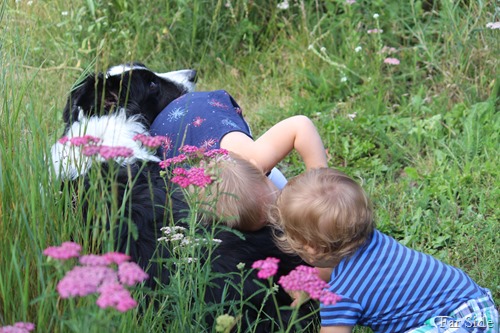 Could someone save me?

Far Side saved me, she said I was a good boy and very patient.

This week I have an appointment at the Vets.  I have to have a blood draw whatever that is.  Sometimes I spit out that pill I get twice a day…eat the cheese but spit out the pill then I get some peanut butter.  I have figured it out!

I am walking better, I am not wobbly and falling down like I was…rest and the new medication brought me back…that and lots of love!  I still sleep soundly and often, but I am an old dog.  I am not allowed to jump out of the car by myself.  Far Side has strips of towel that she slips under my belly and she holds my back end up as I jump down.  Coming down the steps they use the harness that I hate or they stand  at the bottom and help guide my descent. Good thing it is only half a stairway (six steps)…I could not make it down a whole flight of steps.  I can make it up the steps unassisted just not down them.

You were nice to let the little kids hug you. I am glad there are ways to help you go down stairs. Getting old is such a trial sometimes! I know the feeling. I wish someone could help me up and down stairs! I just have to avoid them these days.

Awwww.... having an old dog can be such a challenge but we handle them willingly, don't we. Bless you as you are guided how to best help Chance. And what gentle children! Bless the beasts and the children... too bad the adults of the world don't think more like them. ~Andrea xoxo

Such sweet photos. So glad you are doing better, Chance. Love and attention and of course lots of rest and treats -- just what the doctor ordered!

Hi Chance, you were so good to let those cute little ones pet you and hug you. Happy to hear that you are feeling better. I too have trouble going up and down stairs, so I know just how you feel. There are days I could use some help doing the stairs. Part of getting older I guess, as is napping haha. Big Hug for you.

You are a patient dog, and I know what it feels like to be getting old, too. I wish I had somebody to hug me like those adorable ones hug you! I could do without the strap to help me up and down steps, but I'm glad you have help. Somebody loves you. :-)

Chance, you are such a sweet, patient dog. I'm glad you are feeling better. I just don't know why our legs are the first thing to go when we get older. Going down stairs is the worst. Glad you have such a good family.

We do love the children don't we....but we have to be careful as sometimes they can lean on our sore parts. They are so cute! We don't get to see many kids here...mostly just when the grands come and they are a lot of fun but tiring too!
So glad the meds are helping you and your folks too! It's funny, I (Nitty the Rottweiler)) have the opposite problem... I can go down but I have trouble going up but Mom has caught on that it's the wooden steps that give me problems but the front cement ones I can come up much easier. Annie (miniature dachshund) hops up the steps but it hurts her back and the final stoop into the house she takes one leg at a time. We just turned 13 this month...we don't know when our actual birthdays are because we are adopted; mine is pretty accurate but Annie is by the vet's expertise. So, we all take it one day at a time and we are grateful for each day we can still function! Lots of licks ~ Nitty and Annie

Glad you're moving better Chance, getting older is hard work.

We are cheering you on Chance, glad you are felling some better.

Cute pics of the little kids and Chance!

You were so patient with those little humans!! Looks like they were pretty gentle with you, too.
Having a loving family is the best medicine. But those pills will hep you, too! ;)

I'm so glad you are doing better, Chance! Getting the right meds is the secret and staying active!

Chance, I had to help Reba up and down the stairs to the deck for her last couple of years, and I would do it all over again. I miss her. I hope you have a couple more good years left to share with those who love you. Keep taking your pills!

Thanks for your report Chance. I hope things get better.

Not fun getting old but sounds like you are patient with age as you are with most things.

Awww!! These shots are just adorable!