I am certain that my Grandmother’s heart was broken when her sixth son Arthur E. was killed during the invasion of Italy.  He died May 20 1944.  He is buried in The American  Sicily-Rome Cemetery in Nettuno Italy.  He was 23 years old when he died. 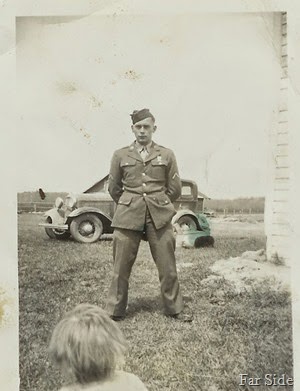 My Paternal Grandmother is  a Gold Star Mother. 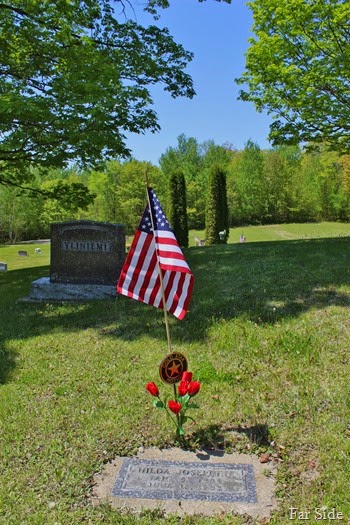 This Gold Star Mother marker was not in place the last time I visited this cemetery two years ago.

There were letters.  Letters that Arthur wrote home.  They seem to have disappeared, I tried to watch for them the day of my Aunt’s auction sale…I hope they were not thrown away.  I never understood her reluctance to share them… but some relatives share their photos and mementos easily…and others do not.

My Grandmother would see  five of her twelve sons go off to war.   All would return but one.   I cannot imagine her sadness that Arthur was buried so far away.

I have a whole file of research on Arthur E.  I tried to follow the troop movements and read first hand accounts of soldiers in the vicinity.  I guess it doesn’t matter, he had no children…no one to pass on his story or his letters. 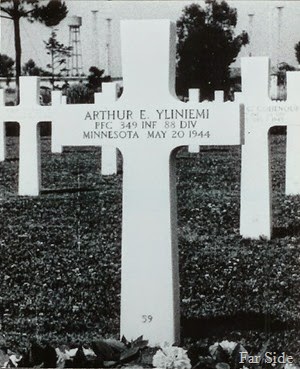 There are 10,484 soldiers buried at The American Sicily-Rome Cemetery in Italy.

What a fine tribute to this true hero. Thank you for sharing the memory of your uncle with me. Only 23 years old. To have him so far away when it all happened, it would have been very hard indeed. :-(

He may not have had children, but he has you, passing on a small part of his story to us.

I was only 12 years old when WW II ended but I well remember all the sadness about boys killed in the war. And they really were only boys - so young - and died so far away from home.

My husband's Uncle was killed in the Philippines during WWII, after the war his Mother had her son brought home and reburied in their hometown.

So many young men were buried in foreign countries. I saw a beautiful documentary (can't remember the name of it) that showed the beautiful grounds and explained that local families have "adopted" individual soldier's graves and visit them because they know their own family cannot. they honor those who gave their lives to save their country.

Letters my three uncles wrote to my mother "disappeared" too. I know the letters were not discarded, so it upsets me even more that they are not shared.

Makes your heart ache to even think about how sad it was for mothers and wife's
back then..

Thank you for sharing the story. Almost all of our family members came home after their service. However, one cousin died in Vietnam. He was twenty and a marine. Two uncles were in WWI, brother-in-law in WWII, Korea and Vietnam (he got in the navy at 16 and retired after more than 30 years,) husband in Korea, son in Desert Storm. Proud of all of them for their service. So sorry for many mothers and wives who didn't get to see their men come home.

Such a touching day and post. I recently read the letters of my deceased cousin who was in a German prison camp during WWII, such horrific treatment. God bless all our Service Men!

Only very brief strippeddown comments are left for relatives. Many questions are left unanswered.

What a beautiful post for this weekend. I am certain your grandmother's heart was broken too. But, I am also certain that your file on Arthur E. matters. It shows a great deal of love and respect for him. Your grandmother would love that.

Thank you for sharing this story. It is the individual personal stories that make the loss from war so meaningful.

I still remember seeing John and Iva Horton sharing the map and a photo of their son's grave near Normandy. My dad survived that war but their son did not. They never traveled to see the grave but the three older brothers of George Horton have been there often to visit the grave in their elder years now. I just saw that we on PBS that we have a cemetery in Africa too.

My father was killed in a small war that most people don't remember. He was buried in a moslem country which has had difficult diplomatic relations with the UK and the last I heard the graveyard had been vandalised by locals. This has been very difficult for me, and especially my younger brother, to deal with. It seems the UK government (Labour or Conservative it doesn't make any difference) doesn't care at all and has made no effort at all to repatriate the bodies. There were not many killed in this war but there must be other families who feel as angry and upset as we do.

It would be nice to think that someone in government cared but I am pretty sure they don't.

I just dropped in from Miss Patsy's blog, and have been just immersed in your stunning family history of warriors and soldiers and sailors, heroes all. I so know the era, and remember being outside the day the Korean War ended, with a neighbor lady whose son was of age, but didn't have to go. She came running out of the house shouting "The War is OVER!" several times, and danced me around the yard.

You have such illustrious ancestors and such heart-filling memories, and you tell the stories so beautifully. I hope you do continue all the research and write and write of them, for their stories deserve knowing and preserving, even with no direct descendants to pass them to. I've been impressed and touched and amazed from way over here in the Heartland, and so hope that you'll share more of this moving family chronicle.

I seldom share a link to my own blog, but I feel that your Uncle Arthur is one of the ones I spoke of, known to the angels and the hearts who loved him. Since you shared so much of yours with me:

With great sadness and tremendous respect we should always remember.

You are SO wrong....it DOES matter.