I wonder when it happened.  It seems like just yesterday he was a baby.  Then he grew and grew.  He was a quiet child I didn’t think he would ever talk.   He would sit for hours and open and shut the screen door in the retail part of the greenhouse… it was something he could do all by himself…no assistance needed…we kept saying “Noah watch out for your fingers.”  Then when he was about two he noticed his Grandfather and his Daddy on the roof..and guess what?  There was a ladder…his Mom ran pretty fast that day.

One weekend his parents left him with us and went someplace…not sure where.  His Mom missed him so much she began to cry and they showed up in the middle of the night.

It seemed like all he would eat was mac and cheese and hotdogs…and Mandarin Oranges. 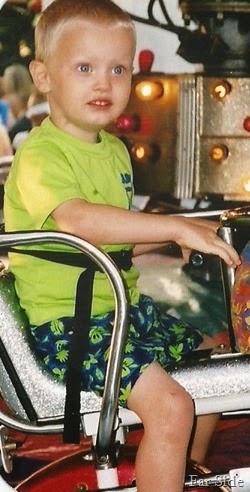 Here he is riding the motorcycle kid ride at the fair.  This was 2002 he was three.

He grew and grew..at their last house we kept track and I would make growth marks on the pantry door.  Now I would need a ladder to make a mark.

I have to remind his parents to measure him now. Six feet what? 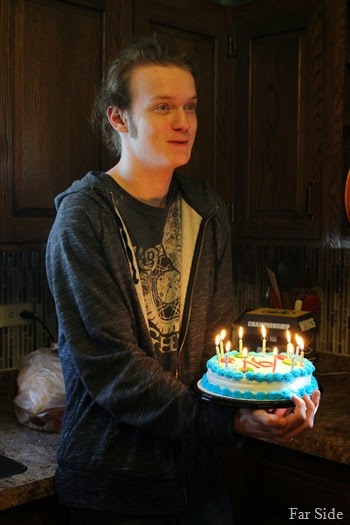 A moment before I took this photo his Mother told him to tilt the cake a little and it nearly slid off the tray! 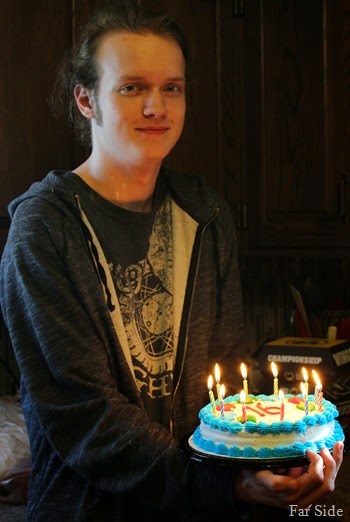 He has plans for the summer.  He had a goal and he has achieved it.  He has an interest in Medicine possibly to become a Doctor.  So what would a 15 year old do in preparation for his 16th birthday?  Can you guess? 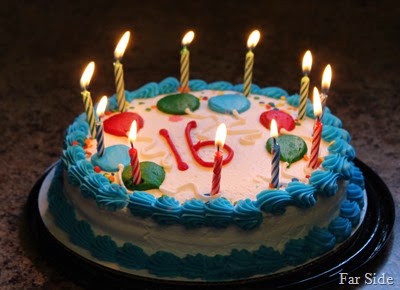 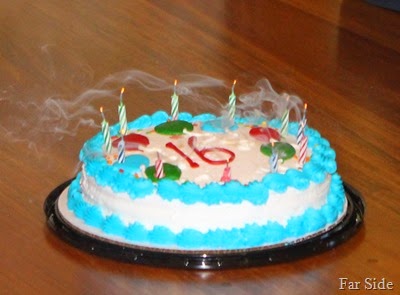 I hope all his wishes come true!

Well what did you guess?

If you guessed that he would take the Certified Nursing Assistant Class, pass the exam and gain employment for the summer in a Nursing Facility you would be correct.  He is excited to begin this new adventure!

We are very proud of him!

Happy Birthday and congrats to Noah! All the best to him this summer!
Wishing you guys a nice weekend.

It sounds like he's a remarkable boy with a remarkable future ahead.
And I can think of few better preparations for becoming a doctor than being a nurse first.
Happy Birthday, Noah!

Happy Birthday Noah. He sounds like a fine young man to be proud of. Tell him congratulations on passing the exam to be a CNA. Have a great weekend.

Wow, that is really neat. He'll learn a lot about what the field of medicine is all about. You captured the candle smoke absolutely perfectly. I am impressed. :-)

Those grandchildren of ours. They do grow up fast. Happy birthday, Noah.

I am sure you are very proud of him. I was guessing his driver's licence, and would never have imagined what he really did. Wow, that is amazing. Good for him, he sounds like he is a real go-getter! Happy Birthday Noah!

They grow up fast and good for him getting to his goal!!!

Wonderful plans, and how smart to get an inside look at the medical field early. Such a blond cutie at 3.

What a great kid ! Hope he has a wonderful day...

Yes, they sure grow up fast! Congrats to your grandson. He's got a bright future ahead of him.

It's such a sweet sadness to see them grow so fast, and a joy of the heart at the same time.

What a grounded young man! He took the first steps toward he dreams. Happy 16th!

I know the feeling of kids growing up rapidly. I think I committed the same sin and then had the nerve to leave home. Happy birthday Noah and I hope you like your summer job.

Happy Birthday to Noah and Congratulations on passing the exam! He sounds like a fine young man who has a bright future!

Happy Birthday Noah and have a great summer.

Oh you must be so proud! And he surely did grow! Gosh, we have a lot in common when it comes to grand kids. Today is my grandson John's birthday...and we both have granddaughters named Madison who are the same age. Happy birthday Noah and congratulations!

Wow. Congratulations and Happy Birthday to him, and to all of you. That is fantastic.
Have a blessed weekend.

What a wonderful young man. You all have a lot to be proud of. It takes a village to raise a child. Happy Birthday to him and congratulations on his accomplishments. He's still a "cutie" too!

Wonderful post ! My goodness how fast they grow ! Oh Congrats to him for passing the exam Happy Birthday Noah ! Lovely photos ! Thanks for sharing , Have a good day !

Happy Birthday Noah! You sound inspired and inspiring! Medical field sounds great ....Best of luck to you in all your future endeavors!

Noah sounds like a great kid. You have good reason to be proud.

Noah has grown up quickly as I compare to the years passed. It is so great he can work in that field and find out where he was to go with it in his life. One of my former guy students went to college and ended up a nurse at a children's hospital. I was so proud of him to go into that profession. If Noah does move on to become a doctor that would be so great.