This is an old photo that was marked by Far Guy’s Grandma Tracie, she most likely took the photo also.

The year is 1923 and it looks like it is in the spring of the year.  As far as I can tell it was taken at the farm. 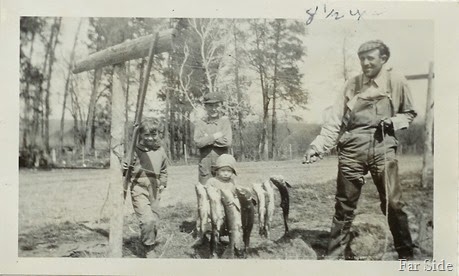 Grandpa looks like he might have been in the river out back.  The fish are most likely Suckers and we think maybe there is a Northern Pike in the front.

The boys are little in 1923.  Far Guy’s Dad Marvin is 8 1/2 according to Gram. That would make Uncle Ronald on the left 5 years old and Uncle Jimmy near the fish not yet 2 years old.

It used to be a big deal to go sucker spearing, the season didn’t open until May 1st…but in a warm spring the suckers ran earlier…and what are you supposed to do?

Some  fishermen might have taken a gunny sack or two and a spear and visited the river late at night.  Maybe…

I might have been with them a time or two…maybe.

Interesting looking fish. They look like what we call bullheads.

What a wonderful photo. Everyone looks like they had a great time, although Jimmy looks somewhat bemused by it all. And I'm sure those were post-May 1st suckers!!

What a little piece of history there. It's definitely from another era. That's almost a century ago. :-)

I'm guessing the suckers are some sort of "bottom feeder". Great picture from the past.

I'm sure the statue of limitations has run out... but keep pleading the 5th!

We have kids, boys, today who do the bow and arrow season to catch fish. I think people would catch them any way that they could. My dad would use some strange frog looking bait and I don't think he ever caught much. We ate perch one night as a kid for supper.

So glad they could take (pictures) back then. Good memories!

lol on the maybe....
.I love the photo. Very interesting to me.

My husband used to snag paddlefish in the Missouri River near Yankton, SD. They also caught a lot of carp!

GEOCACHING WITH GRAMMY AND THE PAPILLON PRINCESS said...

Oh, I've speared suckers and it was never legal. My Dad loved suckers even if they had many bones. Suckers here in Alberta are only 7 -11 in long.

The white sucker is one of most common fish in Minnesota. It lives in streams and lakes throughout the state particularly in the northeast. It has no teeth and a sucker type mouth. Not a Catfish.

Only went fishing a few times when I was a kid and it was sunnies we were after. They were delicious...even if I felt terribly sorry for them and couldn't watch the guys clean them. ;)

Me too, Rita and then later i got a taste for Bluegills. I love those old photos....precious!