We had a pair of Brown-Headed Cowbirds stop by.  First the male came in and checked things out…then the female showed up. 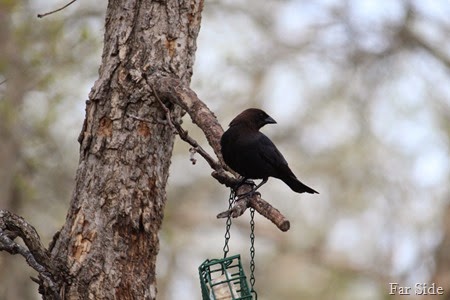 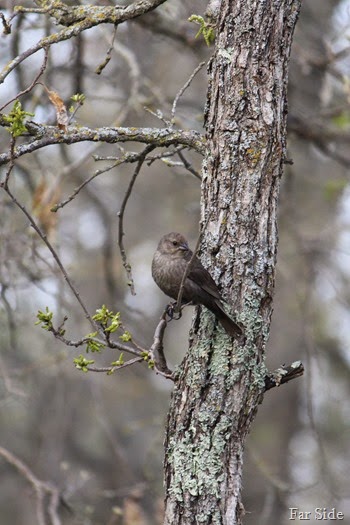 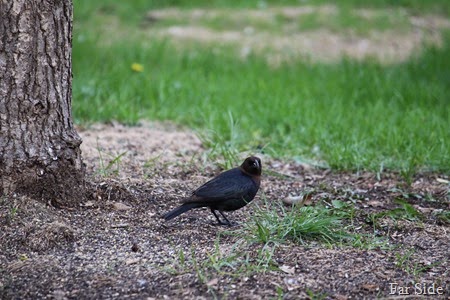 Here you can see that the male has  some iridescent feathers. 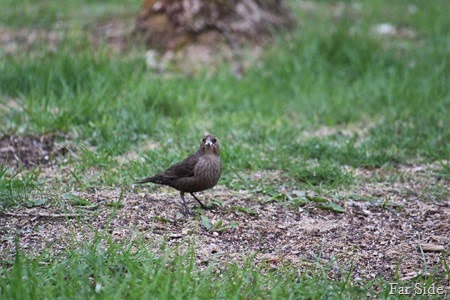 The female is just a basic brown…no sparkly feathers for her.  The bird books calls her color gray. 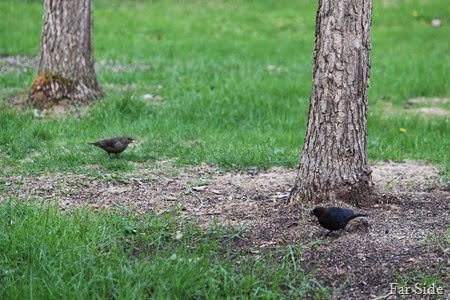 This is the first year I can recall that they have stopped by.  They have been here two days eating suet off the ground that the huge Crow slops all over with his big beak.  If Chance is outside he chases the Crow out of the yard.

The first Chippy ( Chipmunk) showed up on Sunday.  He is living on borrowed time because a certain Border Collie who will remain nameless will herd them aggressively.  Perhaps they die of fright before they succumb to the bite wounds …either way dead is dead.

We have a lot of those cowbirds in our yard. Have seen a chipmunk or two around but our nemesis' are the squirrels.

I couldn't figure out your title, but then I realized it's because of the Cowbirds. :-)

Morning, those Cow Birds are interesting, so nice to see the wildlife thriving. Blessings Francine.

Interesting that the cowbirds are not something you normally see. We have them all over here although I will admit they do not frequent the feeders.

My brother has a dog that digs out the ground squirrels when he sniffs one in the farm yard. Chance will be watching for this little critter to show his head. I've not seen a brown-headed Cowbird.

We had a few cowbirds last year. We don't encourage them, because they are so predatory. Instead of building a nest they lay their eggs in another bird's nest. The babies get fed, and often they quickly outgrow the babies who belong there, and those babies can't compete for food so they die. Nature's way, but we don't have to like it!

One time the only way I knew a cowbird had been around is when I saw a chipping sparrow with a cowbird youngster.

Now the cow birds we have and they stay around until the other birds raise their baby's for them.
Look it up very interesting how they lay eggs in others nest and do not build their own.

Interesting how things seem to be so different, this year. Glad you got to have this unprecedented visit from those two!

No cowbirds here that I am aware of.
I have a hard time imagining Chance as a killer.

Too bad Chance doesn't chase away the bad parent cow birds and not the crows. Can you tell I love crows? And the poor chipmunks. Chance can't help who he despises, though.

I've never seen a cowbird or if I did I didn't know what it was. Are those the ones that sit on the cow's backs? Pretty brown on the male.....guys do have to try harder. LOL!

I don't think I've ever seen a cowbird before. What fun!