I have known my cousin Arthur since I was born.  I met Kathy when he started to date her.  Far Guy knew Kathy because she was a “town kid.”  Her parents owned the best little restaurant on main street in Park Rapids called Wimpy's.  Art and Kathy were married in 1969 three months before Far Guy and I.

Kathy wanted her ears pierced…being frugal…she decided that I should do it for her.  After a few beers she put ice on both sides of her ear lobes.  I threaded a needle with dental floss and pushed it through her ear…on the other side I pulled out the needle with a pliers and drew the dental floss through.  She soaked the dental floss in alcohol several times a day and kept pulling it through her ear lobe…after about a week we put in earrings.  This was during the winter of 1970.

Debra was born in 1971….we became Auntie Connie and Uncle Gene.  A second daughter DJ died sometime in utero in 1974 or thereabouts.

When our girls were born they had an honorary Uncle Arthur and Auntie Kathy.

They moved, we moved.  We saw them at family reunions weddings and funerals.  Later they would buy a weekend lake place in preparation for retirement.  They retired and then we retired and lived just a few miles away. 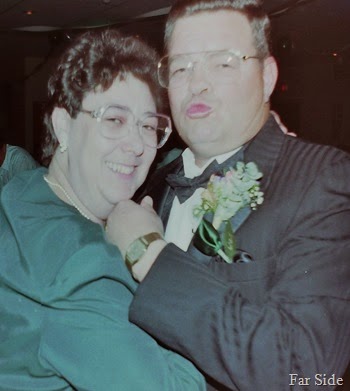 Auntie Kathy and Uncle Arthur…he wanted to kiss everyone…this was the day Debra was married. 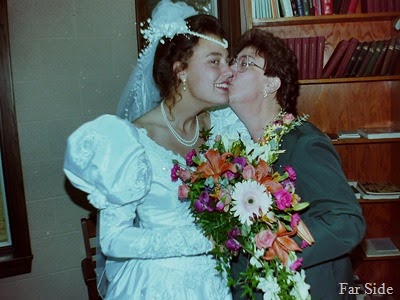 Years and years would pass Auntie Kathy and Uncle Art never thought they would be grandparents…but finally they were!  Three times over!  They were so excited!! They loved our grands and having grands of their own was really special!

Thirty Two Days… April 16 Uncle Art called and asked us to stop by.  We did.   Art said “Kathy has cancer.”  She was in terrible pain. I gave her a hug and encouragement that Doctors can do so much with cancer nowadays.  I also told her “What is the worst thing that can happen?  You will die and go to heaven and be out of pain.” She said “Yes no pain would be a good thing.”  The doctors didn’t know where the cancer originated, they did many tests.  Lung, Liver and Bone Cancer.  She endured radiation treatments. Then the first round of chemo on May 7.  She entered the hospital on May 11.  We visited her several times, she was in unbelievable pain. Mostly she was unconscious…I irritated her one day and asked her if she was going to wake up…she told me to “shut up.” Far Guy told her to sit up and slap me….but she didn’t.  She died May 18. It snowed off and on the day she died. I am certain she is having a big old party up there in heaven complete with the most beautiful flowers you can imagine. 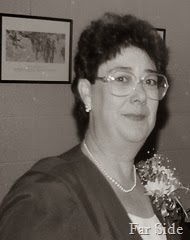 Goodbye Auntie Kathy.  I am sad for you husband, daughter, son in law and your beautiful grands.  But I am glad you are no longer in pain.

I am so sorry for everyone's loss. She suffered in the end from a horrible disease.. that took her quickly.

She was a treasured family friend, and she sounds like quite a character too - her ear piecing adventure makes me cringe!

My thoughts and prayers for those she left behind.

So sorry for your loss. She is now in Heaven and has no more pain. My thoughts and prayers are with her family. Love the ear piercing story.

What a huge loss to everyone who loved her. Thank you for introducing me to her, and I too am glad she is no longer in pain. What a short journey from diagnosis to death. But I'm sure it was an eternity for her. Hugs and condolences for all her family and friends.

Your Kathy has such a sweet face. She must have been a joy to the people lucky enough to know her.
I hope those memories will comfort those of you who lost her.

What a sweet but sad story. Glad she is no longer in pain. @#ck Cancer!
The ear piercing story made me chuckle. You both were brave:)

I am sorry for your lost. No longer in pain and get reacquainted with those gone before.

So sorry for your loss. Kathy sounded like a wonderful person!

Such a sudden loss and it can't be easy to deal with...I'm so sorry.

This was a beautiful post. I am also deeply touched by your loss. But, you are right, in that your Aunt is with Jesus and that is a wonderful prospect. May God bless you all with comfort, peace and happy memories.
Folding you in prayer.

It is so hard to watch a loved one in pain. We said the same thing when my dad passed away, he is in a better place. No pain and he can watch over us now and be happy. Sorry for your loss, never easy to lose a loved one.

Rest in Peace, dear Kathy. You will live on in memories and in the hearts of your family.

I'm sorry for your loss. She sounded like a great auntie to have.

I am so sorry for Kathy's suffering and passing. I'm glad she got to be a grandmother.

I'm glad Kathy is no longer in pain but so sorry for her family. I hope the grands are old enough to have memories of her.

32 days certainly doesn't seem fair but neither does being in excruciating pain ~ I am happy that her pain is now gone but sad for those left behind and for all those that enjoyed her company. I will miss her and the conversations we had.

I can't believe that there is that kind of suffering still going on in hospitals. That is what I hate to hear...I hate for anyone to suffer like that. Thank God she isn't anymore but I am sure she will be missed. She sounded like a great gal and I know I would have liked her...I'm so sorry for your family, her family and all who loved her.

It so hard to lose a best friend. I lost mine a year ago to pancreatic. that's how we got Lily .
So sorry, Connie...

All since April? Such a sudden loss...makes it more difficult to bear, I think, that way...merciful, though, if she was in such unbearable pain. We'll lift up your entire family in prayer for this, Far Side. It's hard to see anyone so special go...

I am always glad when people are no longer in such pain and misery. But that seems so young to me. She will be missed. *hugs*

She was beautiful. My heart and prayers go out to all of you who will miss her so much. I'm thankful she is no longer in pain and that we'll all be reunited one day.

Oh your Auntie Kathy is not in any pain now. Her family will miss her but she is in a wonderful place and always with them. I believe that with all my heart. Cancer is a word I wish was not.HUGS and take care. B