The fragrance of lilacs fills the air.  Especially in areas where there are many lilacs.  It is a overwhelming fragrance.  Far Guy  said "I am so glad we have one small struggling to have two blooms lilac bush in our yard."

These are from the white house with the blue shutters, they never get to see the lilacs bloom. 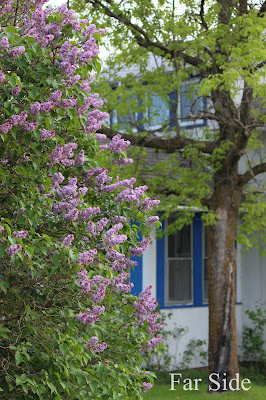 It was a busy week.  Windows Live Writer is still incompatible with blogger...Google changed a setting on Tuesday and they won't change it back....so I am stuck with regular blogger blog software and that sucks.

I mowed lawn again yesterday, we got another 1 1/2 inches of rain that Far Guy dumped out of the rain gauge.

I worked on "stuff" upstairs.  Far Guy worked on the old tiller and a push lawn mower and I sold them both locally online.

One day we went to the Clinic because Far Guy needed another blood test before he begins his infusions...we are waiting on the results...there is a 33% chance that he will be allergic to the infusion and we need to know that before proceeding.  He has two support people now one from Alpha 1 and another from Baxter ( the infusion).  I cannot keep them all straight.  Far Guy visited with his Uncle Archie who related that many of Grandma Tracie's siblings had "lung troubles."  I will be tested for Alpha 1 Deficiency in June. 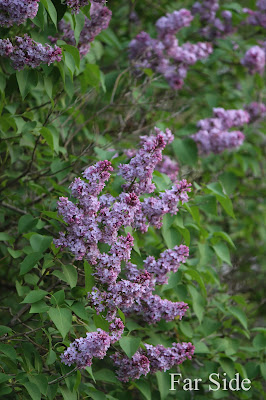 We got news this week that a dear old friend died.  Mary Lou was 87 years old...we met her back in 1975.  She and her husband Ray had a lake cottage just down the road...they were good neighbors here just for the summers after they retired from the hardware business in Prairie City Iowa. She would often walk over and bring something baked for coffee.  When Trica got married in 1994 Ray and Mary Lou helped roast turkeys and peeled fifty pounds of potatoes for me to make potato salad for the wedding dinner. Ray could fix just about anything and carried a tool box in his Cadillac...payment was always a cup of coffee!   We visited with Mary Lou just two years ago before Alzheimers took her away. (Her husband Ray died a number of years ago.)  She leaves behind four daughters and three grandchildren and numerous great grandchildren.

I am not sure about the "comes in threes" old saying...but this is the third death in as many weeks. I hope we are done for awhile .