Colorful Birds and a Missouri Death

Yesterday the first of the Baltimore Orioles showed up.  I am not sure if he found the feeder…he sang a song…very loudly. Perhaps he was announcing his find! 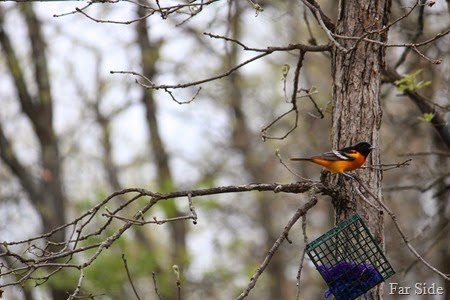 Isn’t he a beauty! 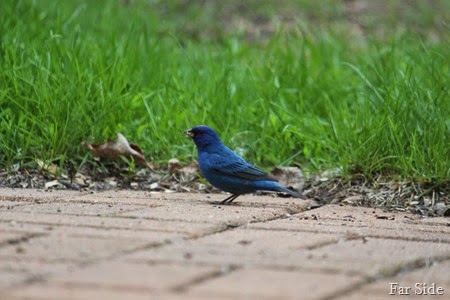 The male Indigo Bunting strutted around on the patio so I took his photo through the window.

It rained really hard last evening…thundered and lightening…Chance headed for the safety of the bathroom.

We got some sad news yesterday afternoon.  Far Guy’s cousin Nickie’s husband Jim died  in Missouri.  He had Non Hodgkin's Lymphoma and has been in treatment since last August, since Christmas the cancer has been out of control, the Doctors gave him two weeks to eight weeks to live three weeks ago.  Jim sought out the best specialists at the University of Nebraska and The Kansas Cancer Treatment Center.  Sometimes it just doesn’t matter when your time is up…it is up.  Thankfully through Facebook we were able to send him words of encouragement during his illness.

My deepest sympathy. I know your encouragement thru fb meant a lot to Jim.
I love seeing your birds. Very colorful.

So sorry to hear about your loss, but you're right: sometimes when your time is up, there's not much to be done about it. But your birds made me smile nevertheless. Wish I could visit you and have a cuppa together. :-)

Your weather that day underscored your loss. I'm so sorry.

I'm so very sorry for you loss. Cancer has become an epidemic.

There has been a death here to, a long hard one ----Sorry for the loss in your family.
The birds are so beautiful !

Love the photos of the birds!

Sorry about the death of your relative. We just drove through Missouri yesterday on our way to Illinois. The bunting is so beautiful!

Beautiful birds, I haven't seen those around our place. Sorry about the loss of your relative.

I'm sorry for your loss. Sometimes after such a long battle, it may be a blessing to go gently.

The loud song was more than likely for a girlfriend in the area.
I'm sorry for Far Guy's loss.

Love your bird pictures! I to love taking pictures of birds. I just in the last few weeks got pictures of the indigo bunting and the summer tanager.

The birds are beautiful - - - the hope of spring and ornaments of summer.
So sorry about the cousin's spouse. Cancer is cruel - - but you are right that we all have a specific time to leave this earth. FB has been a good way to keep up with people. So glad I finally joined it the past few months - - but it can be a time stealer.

Beautiful bird photos! I have been seeing flashes of the Oriole orange in my neighborhood, too. This morning I tried to take a photo of a hummingbird feeding, but that didn't work out. So sorry to hear the sad news of the death of FG's cousin's spouse. May he rest in peace.

So sorry for your loss. The birds are indeed beautiful. *hugs* God bless.

I so hope to see an oriole in our yard again, but they don't come around very often. Likewise the indigo bunting. Both are such beautiful birds.
I am sorry for your loss.

Yes, it's true: when your time is up, it's up. But it still hurts to go through it. You and Far Guy and his cousin's entire family are in our family's prayers for comfort and support during this time of loss.

So sorry to hear about the death of your cousin's husband. Prayers for all that are left behind. On a brighter note I am so jealous you have such colorful birds!!!!

It is hard to lose someone and then when cancer is involved it makes it harder. Sometime cancer won't allow anyone a fighting chance. We will be helping my wife's friend through chemo sessions these next few months. She is all alone and I guess we are her family.

So sorry for your loss. Yes, when it is your time, it is your time, I guess. We're dealing with that, too, as you know. You have some gorgeous birds to keep you company. I hope they don't freeze now that it dropped down to snowflake temps today. Brrr!

I only have a few cousins left and only a few of them keep in touch. I'm so sorry, it's not easy getting older and watching friends and family pass on.