One day we went to a garage sale back in the boonies.  A gentleman was in charge, they weren’t real organized.  Nothing was marked I suppose if you drove a fancy car they charged more or perhaps they were lazy garage salers.  There was a sign that said most things 25 to 50 cents.  Well ok.

I kept asking him the price of “stuff.”   There were two hat boxes, he said they are 50 cents each.   I told him fine I will take them.   I kept piling stuff on his table…THEN…his wife came out… UFFDA.

She wanted more for her “stuff” she was angry that he quoted the wrong prices…loudly she said “I told you I wanted more for those hat boxes.”  He shook his head and said “I already told her a price.”  She got very angry… God forbid that someone stroke out over hat boxes.   I said “Forget the boxes.”  She grabbed them off the table and marched them back to the shelf.

You could tell the gentleman was embarrassed…but I just wanted to avoid a knock-down drag-out fight or WW3.   I am certain she gave him the “what for” after we left.  I felt kinda sorry for him.  Far Guy said “She is a piece of work.” 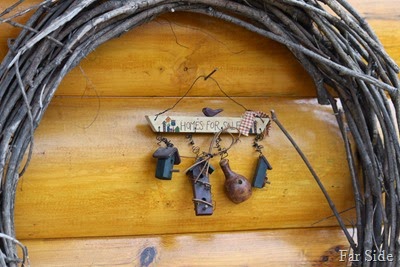 I found this little Homes For Sale sign there…a perfect replacement for the Easter Bunny that has been on this wreath since before Easter.  It was 25 cents.

Oh my! What a gal. I feel sorry for the man. The little sign you got is cute.

Poor guy! She should have taken the time to mark the stuff if she was that stubborn.
I love the tiny sign.

Life in the boonies. I love your stories that give me an idea of what it's like there. Poor guy. :-)

So apparently the customer isn't always right.
Too bad the poor man can't know of all the people sending sympathetic thoughts his way.

Cute sign! I don't go to sales anymore as I need to be having my own! But once I get up North I'll be going again! My daughter and I used to love to hit the garage sales. I'll live through yours this summer.

I like your bargain find. Sorry you missed your hat boxes.

Hmmmm, that's what they get for not putting prices on their things. Hopefully, a valuable lesson was learned by the man and woman.

Cute! I hate it when stuff isn't marked at garage sales. I hate having to ask the price of everything I 'might' be interested in (which all depends on the price). Poor guy!

I wonder if the woman knew about the 25c for that little item as well?

By the sounds of it he should of put himself up for sale to get away from the miserable hag , I cant stand people like that poor guy ! Cute little sign . Thanks for sharing , Have a good day !

How awkward is that! Poor guy. Sometimes if stuff isn't priced I just walk out.

Not pricing things leaves all kinds of opportunity for disputes. You hate to see a couple of people have a melt down.

Except for the place and items you wanted to buy, this mirrors a garage sale I was at. I and the gentleman agreed on a price for an item ( not a low price either ) and as I was paying for it his wife came out huffing and puffing and yelling about how much the item originally cost and how upset she was at her husband for agreeing to the price. I was embarrassed for him and knew he was going to get it after I left. My daughter-in-law was considering buying another item there but immediately told me we were leaving after witnessing the wife's behavior. My dear DIL said we did not need to buy anything from a place where the wife treated her husband so badly, and she was right.

I love your little homes for sale item - best buy and you didn't want hat boxes with that nasty energy around them anyway! :) I think Far Guy had it right!

It sounds like something I heard at home when a I was kid. a lot. I didn't like taking a future wife home for a visit as it didn't seem to make any difference if there was company. It is the joy of the heat of the battle that makes that relationship work, I guess.