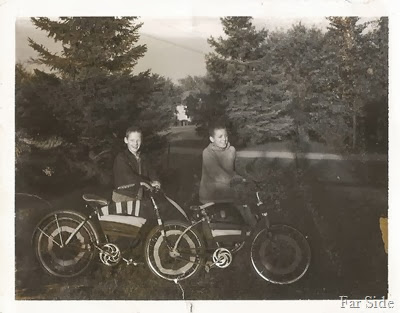 They must have been in a parade…maybe homecoming.  I dated both of them, but not till a little later in the 1960’s.
This photo was taken in Park Rapids in the front yard of the house where Far Guy lived.  That is the forestry across the road.  The road was two lanes back then…now it is four lane with a fifth lane in the center for a turn lane.
Times change and so do towns. 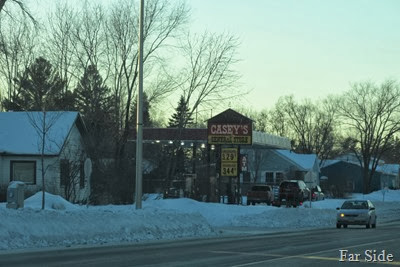 This photos is for reference only. The Andrews, Larson and Taskey homes were bought up by Caseys.  Far Guys old home (gray with white trim) remains at the end of the block.
In the old photo the boys would have been standing with their bikes just in front of the pickup that is parked at the Gas Station, very near that large shrub. 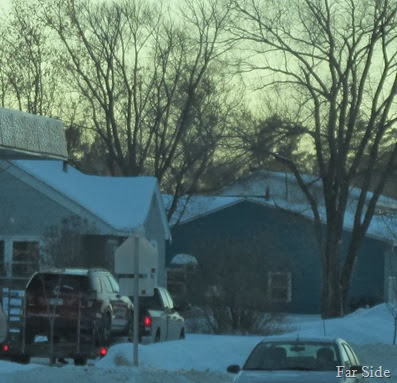 The trees behind them are gone also.
I took this photo from what would have been Emil Taskeys front lawn. 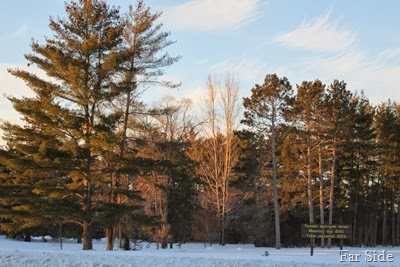 You can see one of the little trees poking up out of the snow.
In retrospect, I have to feel sorry for Emil, living in-between two families with boys. He and his wife had two girls.  Perhaps those boys made him nervous.

Note from my husband:
We took the front wheel off from Marks bike and installed it on the back wheel of my bike making a DIY bicycle built for two. I can still recall trying to learn how to ride it. I think we got a second prize in the parade.
Posted by Far Side of Fifty at 4:15 AM

I love your old photos. They remind me of a much simpler time back then. Thanks for sharing.

I always enjoy before and after photos - even if time was not kind.

Perhaps the guy with two daughters just never worried about whether or not they would "find someone" to marry? :)

I remember those old Polaroid pictures. I've got a few of them around too. I enjoy these visits to the past. :-)

Morning, always enjoy your old pictures Connie. Those were some great looking bikes, love the before and after too, Blessings Francine.

Times sure do change. Pictures sure do say a thousand words, especially when you can compare from old ones to new ones.

The little town I live near still has a bike parade. I think crepe paper decorations are a thing of the past, however.

Bikes here are in the past now . I rode a bike all the time when I was a kid on the country roads and still do from time to time . Lovely photos . It is blowing and snowing a blizzered out here today after such a warm sunny day yesterday and the promise of spring all was melting and grass was showing BLAH ! Thanks for sharing ! Have a good day !

I remember winding the crepe paper through the spokes of my bike to decorate it:)

To much change for me, I see why old people want to live in the past. (now that I am old)
You can bet those boys were sweet as pie and you got the best.
Thanks for your comments and prayers. We are getting better.

Crepe paper streamers were the best!

An excellent post with a mixture of old and new. Homecoming parades are still held in my area, and some kids still decorate their bikes - some things are ageless.

We took the front wheel off from Marks bike and installed it on the back wheel off my bike making a DIY bicycle built for two. I can still recall trying to learn how to ride it. I think we got a second prize in the parade.

The boys are cute boys and I like those bikes! It is amazing how things change over the years. Were you thinking the boys look older than 11 or 12? I have just read about your friend Lois. I am so sorry.

It just amazes me how time has flown by in all our lives and how things change so much. I wish there was a video we could take of our lives so people later on could actually see our history and how we each grew up and what the world was like "back then". The generations now will have more of that with their cell phone pictures and video cams. Back in my day there was not even very many pictures taken. Tell Far Guy, thanks for the edit as I didn't realize that was 1 bike! Genius!

I enjoyed this very much. Hope you two are having a good week.

Yes, towns do change...except where we keep them just the same as they always were, in our memories :)

I had to do a double take after Far Guy's comment...hadn't realized it was a bicycle built for two. Clever!