On The Wings of a Snow White Dove

Far Guy and Chance get the mail every morning…it is a ritual.

I saw the unfamiliar handwriting at the familiar address. Damn.

A memorial card and newspaper clipping fluttered out onto the table.  My heart was in my throat and tears burned my eyes. 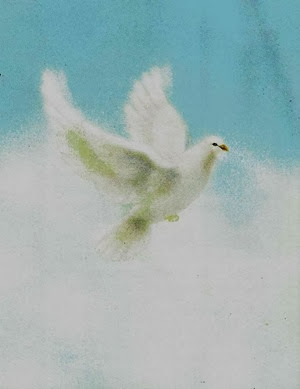 I knew it was Lois, if it would have been Hubert, Lois would have called…but Hubert he is more of a mail guy…a man of few words unless you are face to face with him.

Lois was 75 years old, I met her back in 1968.  She was a good friend for years and years…then they moved and we moved and we lost track of each other.  I sent a letter to the café in  the small town in Oklahoma where I thought they lived and lo and behold the Letter Carrier recognized the name.  The phone rang and it was Lois saying “I heard you are lookin for us?”

I sent her my famous notecards every so often, catching her up with our news.  I sent the last card in mid January, I last heard from her just after Christmas.

Now she is gone.  She didn’t have children.  She had a well loved blind in one eye cat called “Half Pint” and of course Hubert. 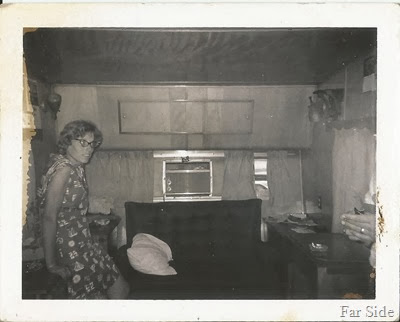 She was taking to Far Guy, those are his hands off to the right.

It is what it is, we always wanted to go and visit them but never got there.  I am thankful for the numerous phone calls and letters we exchanged over the past few years.  Lois was a good friend.

Both of my long time letter writing friends have died within nine months of each other.  My mail box is going to be a little emptier from now on.

Do you have any old friends who you exchange letters with?

My deepest sympathy in the loss of your friend. So thankful that the letter carrier got your letter through so that you had been in contact in recent years. God bless all of you who miss her so.

My deepest sympathy on the loss of your friend. I have a friend that I met 40 years ago. We used to live just a 1/2 mile from each other; now we are a 10 hour drive so we don't get together. We still correspond via mail and I do call her once in a while. When we talk it is like we just saw each other. I am so glad you were able to find her and keep in touch. I can imagine how much you will miss your old friend.

I had a letter writer friend, too, but he died a few years back. I was married to him and we parted with less than positive feelings, but he found me years later, and we corresponded for years before he sickened and died. Now the only good things I get in my mailbox are magazines. So sorry to hear about Lois.

I am so very sorry for your loss. Good friends are precious as gold.

I know Lois appreciated your notes and letters. I bet Hubert did, too.

Sorry ! I felt the same when my long distant friend died. We talked by phone but mostly mail.
I have one friend that still sends notes by mail.
The Bennie is drinking more water and ate a little breakfast this morning. I thank we are turning to the better side.

Sorry about your friend. It's hard to keep up when friends move away. It seems to take so much effort. I can't remember when I last got a snail mail letter! Cards, yes, but letters seem to be extinct.

I am so sorry for your loss. My cousin and I exchange letters every now and then. It is fun to get mail out of the blue from someone you care about.

On The Wings of A Dove was the song Mom requested for her services.

Sorry for your loss. I exchange emails with a lot of people and often wonder what they would think if something happened to me and no one responded.....the Bossman DOESN'T even know how to turn the computer one let alone reply to an email.

It is a tough loss when you have been such great friends for so long. I am glad the husband sent you the obit to let you know.

My sympathy to you for the loss of Lois. There's nothing like paper mail, but I think it's gone.

So sorry to hear of your loss of a close friend. Wish you had been able to visit once again, but as you said, it is what it is. What memories you have of her now...what are the chances that you could find her, after moving, like you did?! What a story. Thank you for sharing your friend with us. I hope your mailbox sees multiplied returns, even though your two close letter-writing friends are no longer here.
:(
:(
:(

So sorry for the loss of your dear friend. So glad you were able to find her after she moved. Letter writing is getting to be such a lost art. It's too bad. I usually only write letters at Christmas. I should do it more often.

I am so sorry, it is never easy to lose a friend. I do phone calls, or texting. Now that the new age is here, no letters.

Like you, Connie, I am an avid letter writer. I write to a friend who goes back to lst grade....however; sadly last November my sister died. She was my most ardent letter writer. She also won one of your carvings a few years ago. Like you, my mail box Is much emptier as well as my life.

Good for you for finding your friend and reestablishing the friendship while there was time.
I did find a former college roommate who I had lost, and we met up last summer, but I have no one that I exchange letters with on a regular basis. I have discovered that many friends and family members follow my blog, but never comment, so they know all about me but they remain silent and invisible. I guess some folks like it that way.

Harriet, Who was your sister? I cannot think who she might be? I have been missing comments from Liz in PA for a long time.
I am so sorry for your loss.

So sorry for your loss. "It takes a long time to grow an old friend."
I recently reconnected with an old friend from my childhood thru Facebook. I know what you mean about letter writing though. It's becoming a lost art. Did you know they are no longer teaching cursive writing in some schools?

Oh Im so very sorry. I can picture the clipping fluttering out of the envelope….

I am soo sorry for your loss . I e-mail my friends and vise versa as they don't write letters any more . I wish they did write hand written letters as I still enjoy that !

I'm so sorry about your friend. It's always exciting to get a letter in the mail, but I can get just as excited about a good email too:)

So very sorry for your loss.

I'm so sorry, Connie! Losing friends is one of the hardest things there is about living.

I wish. How did we let that fall by the wayside...

I'm so sorry you lost your good friend. I've lost the few I had and now it seems hard to find any. They knew our history and that is something you can't just catch someone up on in conversation. They were there while we were creating those memories. You've got me tearing up now. Take care.

The girl I grew up next door to (I was five when we moved in and she was seven), Linda, and I write long letters--sometimes 10-20 pages. It's nice to have an old friend who knew you when you were just a kid and knew your crazy family--LOL! You will miss your friends!!