Jen was going to a conference so I went along and helped drive and watch traffic.  We were gone about 31 hours. We stayed in a fancy smancy hotel on the 15th floor.  I calculated how many sheets we would have to tie together in case of fire and we didn’t have enough in our room…then I noticed they had a sprinkler system and there was a ledge not too far out the window where we could have sat waiting for a ladder truck.

The next morning I couldn’t figure out which direction was which, I was looking out the window across the city feeling really lost…which way was home?  Jen showed me on her I pad which way was north…I would never have guessed.  There wasn’t any moss on the trees to give me a hint of a direction…but we did see a Robin…my first of the year.

We had breakfast in the hotel. Out of a box eggs…I think perhaps they have lost the appreciation for a real egg. The delicious poppy seed muffin almost made up for the rubbery eggs. They must have an awesome pastry chef on staff. 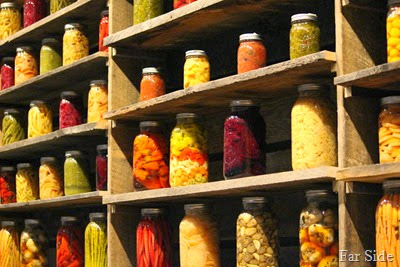 This was the food art in the dining room.

I was going to have an adventure taking the bus…but Jen was certain I would get hopelessly lost, so she drove me to an old friends house that was just 15 minutes from the hotel.

Chance thought I smelled awfully interesting when I returned home after a long day of playing with other dogs. 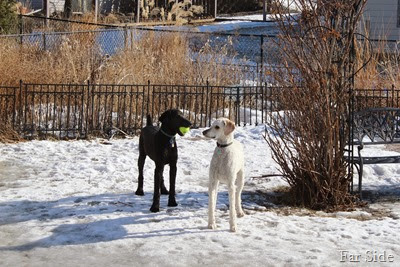 My old friend has two Standard Poodles.  I have never been particularly fond of Poodles after living next to a few yappy little ones years ago.  These two boys were fun and interesting to watch.  Since their Mom was working half of a day from home..we had lots of time to get to know each other!   We became fast friends! One thing I will say is that their coats were a pleasure to stroke..so soft almost like down. 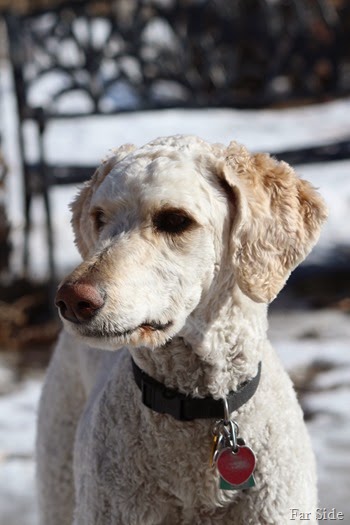 This is Kirby, he is a real gentleman.  Both dogs are respectful of your space and listen to commands.  No bark, sit, stay, come and enough!  They have been to a few classes. 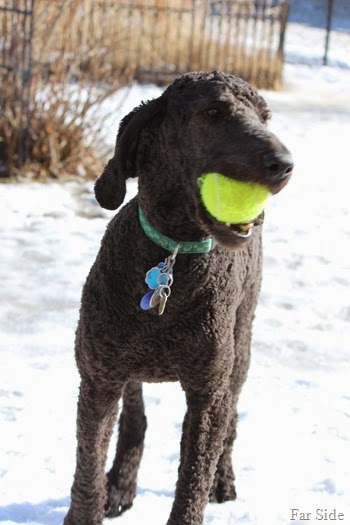 Stanlee is the younger of the two dogs.  He has lots of energy and is attached to that ball!  He is even more ball obsessed than Chance.

It was good to get back home.  I am not certain how people can  enjoy living in the big city, I appreciate the quiet non traffic life in the country.

Morning, nice to take a little over night trip but always great to be back home. I am not a Poodle person either but those are beautiful dogs, Blessings Francine.

I'm beginning to pack for my week-long trip. I'll be glad to go but also glad to be back home in my warm and toasty bed. They are some good looking poodles. I think standard poodles are smarter than the little toys. :-)

Travel always sounds great to me until I have to go. I'm becoming more of a homebody as the years go by.
And the poodles look like fun guys. I think poodles' image has been spoiled by all the silly haircuts. They're actually great with people, and better than that, they don't shed.

I, too, have not loved the tiny poodles I have met. The standards have kept the original quality of the breed while the little have been bred for size, I think. I met a pair of standards once and was impressed and surprised they were the same breed as the yappers.

'There wasn’t any moss on the trees to give me a hint of a direction' - that gave me a good laugh. :-) Sounds like a great time and oh my I'd love a Standard Poodle!! They're supposedly the smartest breed there is (followed closely by my late GSD). Anyway, isn't that cool food art. I might try that! Why not put some of my home-canned goods on a shelf in the kitchen. Love it!

A road trip is the perfect way to cure Cabin Fever!

I always get excited about a road trip . But once I'm on it all I want is to go home. I usually am the navigator on our road trips as I have a sense of direction unlike my husband who gets lost driving out of the driveway. Given a preference on the poodles I will take a standard poodle over the toy poodle (ankle biters) any day. Poodle's are so soft and silky because they don't have fur, they have hair.

I have to grin a little at your post. As a suburbanite who loves going into the city, I was a little surprised by your reaction. I thought maybe you were joking. But then I realized that you probably were uncomfortable out of your element.
I grew up a country girl, and I love spending time in rural areas, but I like my life here. We all have our comfort zones.

That first paragraph describes me perfectly!! I had to laugh! The first thing I do in a hotel is look out the window and wonder what I would do if there was a fire. I never get a good night's sleep in a hotel.

Sometimes we have to take a look at how other people live to appreciate our space.

So did you beat "She who sees robins first"? You may have mentioned it already and I somehow forgot. I love teh wall of food art. It is very, very pretty. Dogs are funny when they smell us all over trying to figure it all out.

Nice to have time with Jen but it's nice to get back home, too! Those are cute dogs. I've never known anyone with a poodle.

The farm stand we patronize near our home has jars of "food art" like the ones in your photo. When the season begins, I'll have to snap a shot of theirs and we can compare...although I think theirs are the real McCoys...antiques from the home canning era...

We have friends who have standard poodles. They are very intelligent, sedate and respectful of your space, as you said. Not at all like those yappy little ones. A totally different breed, it seems.

Finally, a poodle with a good haircut! I wouldn't have known they were poodles. It's fun to visit big cities once in awhile, but as someone once said, there's no place like home, Toto.

How much fun. It's always so much fun to have lots of smells on our people!

Born and raised in Minneapolis--but living in a suburb was less crazy than right in or near downtown. But I found out I prefer living in smaller cities with less congestion, though. Fargo/Moorhead is big enough. The best place I ever lived was on a farm in Wisconsin where I couldn't even see a neighbor. ;)