Only the Shadow knows.. 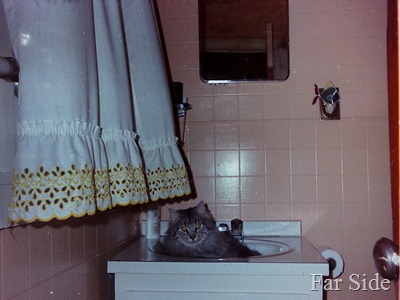 …why he loved to sleep in the bathroom sink.

He would lay there half the day until someone ran cold water for him to drink out of the faucet. 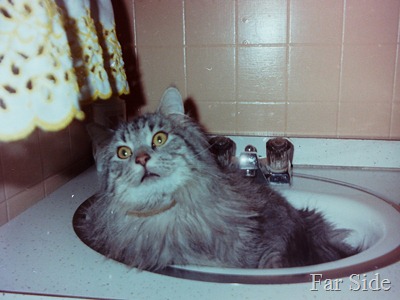 He was a weird cat.  He was trained to go potty outside and would wait to be let out the door.   He would use the cat box only in a true emergency.

Shadow was a replacement kitten.  He replaced Midnight who was a gift to Trica from Jason.  When Midnight died of Feline Leukemia..Shadow was the replacement.

Like I said he was a weird cat.  He bit my father in law..who promptly got cat scratch fever and required a hospital stay and a surgery.

When the dogs..we had four..would get into a fight..Shadow would leap into the fray and land on one or another of the dogs and the fight would be forgotten..after all a kamikaze kitten was not to be trusted.

Shadow lived with us for a long, long time.  He finally moved in with Trica..and was euthanized because he could not be trusted around Savannah when she was a newborn. He was very jealous..and the day that he peed in Savannah’s car seat was the last straw.

There was always something a bit weird about that cat named Shadow…but only the Shadow knows why:(