I am not hungry after a large meal yesterday at one of the local churches..I heard they cooked 36 turkeys…but no one peeled potatoes because they were out of a box..since I did not have to cook OR clean up I am not complaining..just stating the facts.  We visited with neighbors that we hardly ever see and an old friend (94 years old) that recently moved to town.

We had a quiet day, our girls were at their husbands’ families for dinner.  Everyone must share..they cannot be in two places at once…or be expected to eat two dinners in the same day.

We went to Jo’s for pie in the evening..pumpkin!! 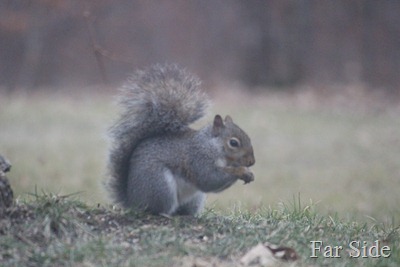 We had two squirrels that kept Chance busy most of the day.  The squirrels knew when he was in the house.  Everyone got some exercise..both of the squirrels and Chance.  The photos were taken inside through the window. 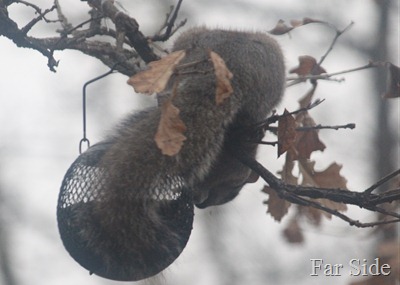 A storm front was headed through and the squirrels were extra hungry..or perhaps they knew it was a day to feast.  I may have to move the round feeder…either that or figure out some kind of squirrel baffle. Since it was Thanksgiving and all..I decided to be nice.  The rest of the feeders are difficult to reach.  One of the squirrels was content to be on the ground picking up falling seeds that the one hanging on the tree branch dropped.  Perhaps this was the squirrel version of a Thanksgiving date:)

The squirrels keep our cats entertained and exercised, too. It's like a membership to an exercise gym.

Glad to hear you had a lovely day . The squirrels here love to toy with Miggs and she loves to tree them . Weather is windy and warm but temps are to drop later in the day and we may get snow flurries . Nice photos . Have a good day !

I have been overeating for a week now, and it seems I just keep getting hungrier every morning. When I get home (Tuesday) I'll start eating like a normal person again. :-)

Happy to hear you had a nice day. Squirrels have been very active here lately. Late yesterday a storm started moving through with some very strong gusty winds. We still have the strong winds this morning and the temps are still dropping. Saw some snow flakes also. Oh well, guess now that Thanksgiving is over "old Man Winter" is coming. Love the photos of the squirrels.

I love to watch the squirrels in my front yard.

Our dog trainer said that squirrels were put on this earth to entertain the dogs! I think she may be right. Here, it is the bunnies!
Your Thanksgiving day sounds like it was truly lovely!

We have squirrels here too, but we rarely ever see them in the yard. Maybe they figure three dogs are just too much:)

Happy Thanksgiving, sounds like you had a great time, kids or not.

We have a squirrel here that is busily intent on stealing all of the sunflower seeds, but no one seems to mind, lol.

Great shot of the squirrels. This was the first year that one of our kids wasn't home for the Thanksgiving holiday. I missed having her here! I quess I better start to get used to it happening. Yuck!

A neat idea to have the Thanksgiving meal at a church. As you say you met old neighbors. I would also bet that the church raised some funds.

LOLOL!!! Thanksgiving squirrel date!!
Hummm? Scraps. I think I have been in one of those relationships...maybe more than once, truth be told. ROFL!
Sounds like a wonderful day. :)

That's quite the clever squirrel you've got there ;)