Our oldest daughter Trica and family moved into a different house over the weekend.  Thank goodness the weather cooperated, it was 40 degrees and sunshine. Jen, Andy and the boys came to help.  I cooked lunch to take along.   Sloppy Joes, potato salad, chips and cookies..to keep the teen age grands fueled and on the move.  When you are moving the last thing you need to worry about is a meal.  Noah was not sure that he would like the sloppy joe..he said “What if I don’t like it?”  I assured him if he tasted it and didn’t like it that it would not go to waste..that I would eat it for him.  Four buns filled with sloppy joe mix later he was full..and declared them “pretty good.”  Adam could not be talked into a taste..I said “fine eat chips then”..so he did.  The girls packed it away pretty good too..Maddie loved the potato salad ( three helpings worth).  Paige wanted to know what was in it and wondered if it really had potatoes..duh?  ( Paige doesn’t like potatoes.)

We had quite a conversation at the table..one I am sure the grands will not forget..it involved the “p” word ( Paige said it first.) I continued on with the “p” word and then the “v” word..and then anus because we all have one.   They were giggling so hard they could barely breathe.  My oldest daughter finally said “MOTHER..that is enough.”  I think I might have made a memory! ( I did say the real words right out loud in front of God and everyone…I never got to the rectum..wreck em hell killed em part before I was shushed.)

I was tired after Saturday..moving is not for sissies or old people.

Here at home I turned the pumpkins around to reveal a turkey.  So much for decorating for Thanksgiving!  Easy Peasy:) 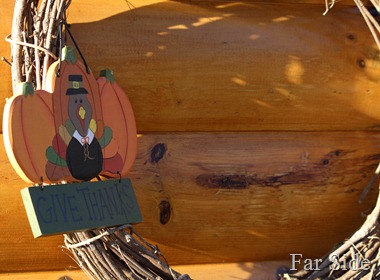 Yes, I'm sure you made a memory and they will be telling THAT story for years to come!

Your picture is something orange...

Good job granny, beat those kids at their own game. I'm sure you made a memory moment!!! And that's a good thing. Who cares what their parents say!!!

Sounds to me like everyone enjoyed the move. Moving is something I dread. You did a great job granny!

My daughter is always shushing me when I say something like that. Usually it is just me saying the other word for poop.

Just say it like it is:) Ha, ha, you're a grandmother and then some!
Glad the move went well, and really, what's not to like about Sloppy Joes?:)

Isn't it fun being the 'naughty' grandmother!? I love that role!!
Peace,
Muff

Yum sloppy joes - how could you NOT love em. You are an evil Gma aren't you with all your "bad words". LOL They will remember that for a long time I am sure!

Never mind my Nana talking like that it was my own mother at the time , she would have us rolling on the floor in fits of laughter ! Best way to be blunt, honest and to the point ! That's what they will always remember ! Have a good day !

Grandmas today are supposed to be potty mouths. It is something the grandchildren love and their parents get annoyed with.

I am laughing so hard, I think I almost fell off of my chair...and it has arms on it.

Connie, I had no idea, way to go! Yes most likely you did make a memory, one that they will retell decades from now in front of their kids....remember when Gram said the "words".

I love sloppy joes, we should have them more often.

Sloppy Joes are one of my favorites - I'll eat a few!
I guess one of the great things about being a Grandparent is being able to do some outrageous things with the kids! My dad used to love to goad my kids into misbehaving and being silly at the table - it really made my mom angry. My dad loved pushing my mother's buttons - and using the kids as the prod was extra fun!

Sounds like you can have fun no matter what. Fun moving? Not for me. You can even teach a few lessons along the way. Who said Farside was a grump? Whoever it was, I don't think they're right.
Have a happy Thanksgiving.

How can you not love a naughty Grandma, ha ha.....Happy Thanksgiving from Winnipeg, Canada, Francine.

Happy Thanksgiving to you all! ♥