Chance: Where are we?

One morning we packed up the car and took off.  We had enough food for me to survive for ten days…and I took two balls and two leashes…and a water dish..and bottles of water…and a few Milk Bones and various other treats. I was not going to starve to death.

I got brushed real good before getting into the car.

Motel’s that have elevators are scary.  I hit the deck..and shivered and shook until it stopped moving…I now have a fear of little rooms with only one door.

We stopped at Sue, Joe, Big Jake and Buddy's place …Big Jake growled at me and Buddy barked. Sue and Joe were happy to see me!

Then we drove and drove..until dark.

The next morning I woke up Far Side really early… 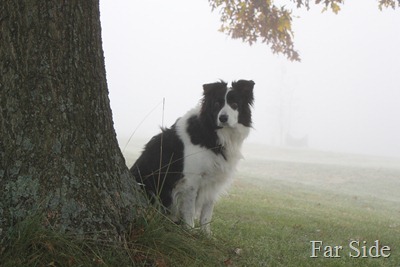 It was foggy..I could hardly see a thing.  Far Side wandered around in her jammies in the fog. 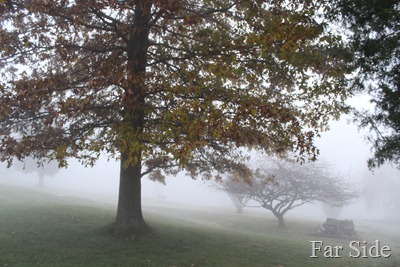 It was warm..well warmer than Minnesota. 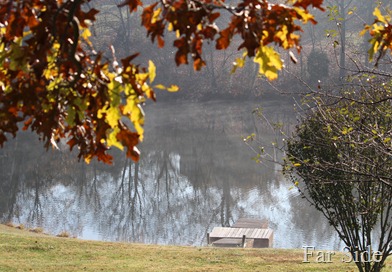 Some trees still had leaves..and the grass was still green.  When the fog lifted I saw the lake. Yes, I went in for a dip. 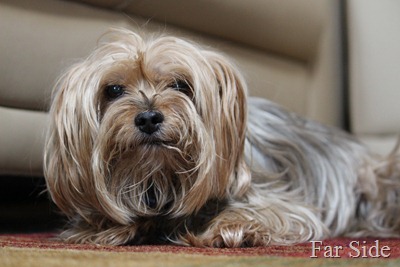 Meet Ernie..or Ern..or Ernest..he has lots of names.  He is just a little thing..I inadvertently sat on him one day..poooor Ernie.  Over the years most of his teeth went missing..he has about four left..he can only be fed small bits of food.  He has a bum leg..but he ran around pretty good while I was there.  He ran around with me in the yard..he led Far Guy through all the neighbor yards early one morning..poor old Ernie probably forgot where he lived.

Far Guy’s sister lives with Ernie..she likes me too:)

Looks like a lovely morning. The fog in that second picture is beautiful. Ernie is a cute little thing. Chance you a lucky dog to have someone to like Far side to lead you around in the fog.

Those foggy shots are so gorgeous! And you are too, Chance.

Morning Chance, loved your blog.....I don`t like elevaters either.......Lovely place you stayed at by the lake, fog and all, sweet little Ernie........Hugs Francine.

Oh, Chance, I'll bet you got Ernie's heart rate up more than usual. And I can understand why you don't like elevators. They make no sense! :-)

Chance you are a very adventurous dog! The fog looks so inviting. Even humans get creeped out in some elevators. The last time I rode an elevator it made so much noise I thought I was going to die.. Ernie looks like a seet dog.

Chance, everybody likes you! Well, maybe not Ernie if you sat on him. I'll let you in on a secret- I hates elevators too!

Quite the trip there Chance ! Sounds like you had fun ! Lovely photos ! Love your new header photos ! Have a great day !

Looks like you had a good time, Chance. I like to travel with lots of snacks/food, too! Ernie looks like a great pal to run with!

Have a great time with Ernie, but don't sit on him anymore!!! You are one lucky dog, except when they make you go in those little rooms with one door!!!

Chance, you blog, and you take amazing pictures....wow, super dog.

Sounds like you had a great time, and made some new friends.

Far Side - those pictures of Chance and the trees in the fog are absolutley breath-taking!!!!! I love them, I want to frame them or make something really neat out of them. You take fantastic photos and I your blogging is always the perfect match, you always know what to say or how to explain what is going on. YOu have a wonderful thing going, your blog, your family should truly cherish this for years and generations to come!!!!

What a fun trip and I love love the fog picture!

You are a great traveller all brushed up and ready to ride. It is nice of you to share Far Guy with Ernie. Ernie looks like a great family dog too. I am glad you got to go somewhere that had a little warmer weather.

Chance, I love the picture of you in the fog by the tree. You look very wistful!
I don't think our dogs have ever experienced an elevator - I bet Gypsy would be very skeptical of the 'moving room'!

Jake agrees with you on the elevator thing:)
We have fog here this morning, with the sun trying to fight it's way through.

PS Just noticed the hunter and turkey in your header. Some people have such great imagination:)!

Fog always makes everything look so magical. What great photos! Chance, you are an excellent model.

Hey Chance. What fun you had. I like trips too and finally got to go camping this summer. The boss said I was so good I might get to go again sometime. The Missus, as always, looked skeptical. Take care now and don't freeze up der in da nort country...
Baron

Chance , I like your story about your trip. Don't be afraid of elevators. They only get stuck once in a while .

Glad you had a good trip Chance. Come visit when you're rested!!

What's not to love about this post...that face is jusst darling....and Chance is just the best! I love the turkey hay bale!

Oh, Sweet Chance! What a wonderful, joyous post! (Except for the scary room with one door that moves, of course.) You are such a good traveler. :)