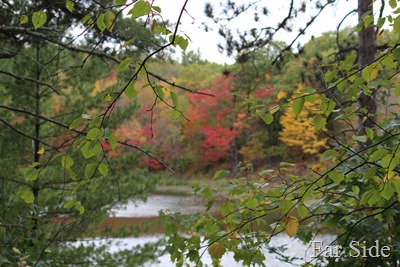 Remember when we were kids and thought time went to slow because we always wanted to be a year older. Well, we got our wish and now time flies by so fast it is just a blur. The joys of getting older. Enjoy your vacation day and you get a "job well done" for all your hard work at the museum.

Beautiful fall pictures at the end. I know what you mean about time flying. September is almost over! Where did it go?

The older I get the faster time flies.

You are crazy busy! But would you have it any other way? :)

Having worked through my summer I think that life has gotten way to fast. We didn't do normal summer things so I have to think about to know what season we are in. I guess Christmas and Thanksgiving we put my mind frame back on track. It is good they have a director that wants to see the place to change in the positive and to promote its use. Museums are great to have and memories of the past are great to see. The big rest is coming for you. Well at least you can take one thing off your agenda.

Do we get to see the tv report?:)
Congratulations on another productive season at the museum, despite all the road blocks thrown in your way!
I'm betting you'll be back next year, and I think you should ask for a raise:)

Finally -- your much-needed sabbatical!! Relax and enjoy until next year. You did a great job, now get some rest!
Peace,
Muff

Congratulations on meeting your goals at the museum. I predict that next year more locals will come in and help preserve their museum. I also predict the commissioner who made the "let it burn" statement will be history at the next election.

Cooler temps here, too, but nothing as low as 24 degrees! Only a light frost here one morning, but still no hard one(s).

Hooray for another year's end at the museum. Around our house, we call that Time Flight the "Stevens Theory of Relativity." ;) For every increase in the unit of time, the ratio becomes smaller. A year may be 20% of a kindergartener's life experience, but only 5% of a college student's. I won't even begin to do the math on ours. Let's just call that kind of ratio one-over-bleep!.

Glad to hear your AmeriCorp volunteer wasn't injured too badly. That sounded like it could have been awful!

Don't twist your ankle doing the Dance of Joy after work tonight. ;)
Yes, when we were in school as kids a school year seemed to last forever...but summer sure flew by. Ever since leaving high school the years seem to have sped up a little more each decade. That means we are having tons of fun, right? ;)
I'm glad the young man was okay. Probably because it was on sand and not concrete. Whew!
Enjoy your time off. I know you will still get a lot done. Let us know how the 15 minutes of fame went with the public TV reporter. :)

I found that once I graduated from High School back in 1968 that time started to really fly by. I was 18 then and now suddenly I am 62. Where did the time go?

Thankful to hear David will be ok.
Thankful to that you are coming to the end of your job.
Hope you can enjoy some down time at home with Chance and FG.

The minus 4 would certainly put a little frost on the pumpkin. Why does politics always have to get in the way of progress?

Thankful to hear that he will be OK, that must have been very scary for all of them, and him especially.

September has flown, it's scary where did the days go.

Love that last photo! I bet you are going to miss the work day ;) You are correct the time sure does seem to go a whole lot faster!

Brrr.... we haven't had our first freeze, yet. But, I know it is coming. Congrats on finishing up another year.
Love your fall photo - the colors are amazing - and it's fun how they are veiled in green.

I think I like that time flies. Lately I've notice how it doen't go as fast as I expect it to. I like to get to the new stuff! I don't know about guessing when you will get snow. It could be slightly depressing, not because I would most likely lose, but because most likely we, in the PNW, won't be getting any this year. For the greater part I'm happy, because El Nino may mean no snow but also no abundance of rain and hopefully no flooded gardens. But I like snow. I wish I could somehow have the continual growing season that I enjoy and snow, all at the same time. Ah the impossible.