One hundred years ago today my Grandmother Hilda gave birth to her first son.  She and Grandpa named him Wilbert Samuel.  The oldest son, the first of fourteen children.

My Grandparents had been married fourteen months before Wilbert was born. 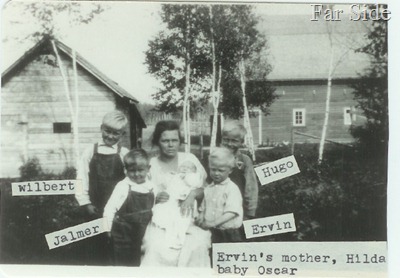 By summer of 1919 Wilbert was seven years old, Hugo was five, Jalmer was three, Ervin was two and baby Oscar was born May 31 1919. ( He helps to date the photo!)  By this time my Grandparents had been married eight years and they had five sons.

I always think my Grandmother looks tired in this photo and I bet she was.

This is one of my favorite photos. Uncle Wilbert is cutting my Uncle Hugo’s hair.  You just had to make do…I suppose you could always wear a cap. Wilbert was the barber and cut everyone’s hair..well at least all his brothers hair..when you have lots of brothers you get lots of practice. 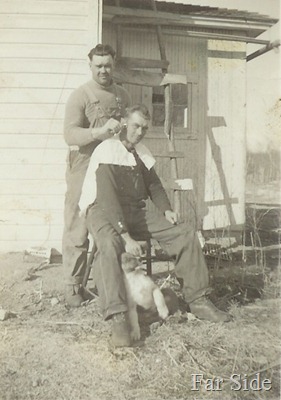 My Uncle Wilbert married my Aunt Senia ( Who is still alive, but lives in the Nursing Home.) 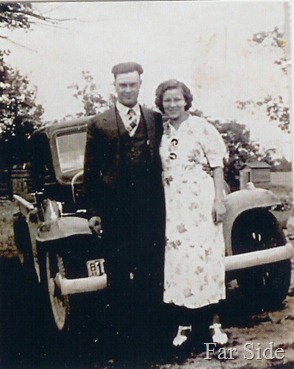 This may be their wedding photo.

My Uncle Wilbert died in February of 1990.  He had the flu and was recovering in the hospital and died.  He was 78 years old.  I had many opportunities to have coffee with him and visit…I wish I had written down some of his stories. 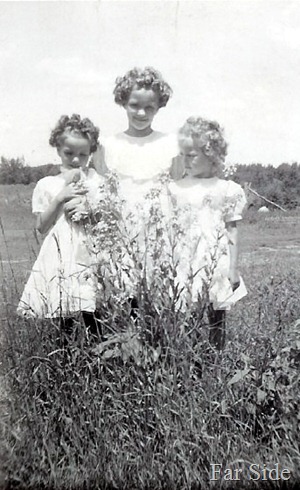 My Uncle Wilbert was like all of my father’s brothers. They were all strong men physically and emotionally, steadfast in their faith and good fathers with a keen sense of humor. Salt of the earth.

One hundred years..I often wonder what it was like back then.  My Grandmother was a midwife later in her life.  I imagine that she was tended to by her mother and sisters for the birth at home:)

Wow, one hundred years ago! And Senia is still alive, somewhere around the same age. I enjoyed these pictures and learning about Uncle Wilbert.

Isn't it amazing how life was so very different back then. I too wish I would have captured more of my families stories. That is one of the reasons I blog, to preserve what I know and pass it on.

Wonderful old photos and story about your Uncle Wilbert! Thanks for sharing with us ! Have a good day !

Your Grandmother does look tired. I often think of how hard life must have been for these women as they had many children, few conveniences and little help.

Eight years, five sons, had to have been hard first years but golly wow, how rewarding in the years ahead. I hope they were farmers!

Harsh climate, cold, hot, and poor in money, rich in family. She probably didn't have a say in how many kids they had, no wonder she always looked tired...I have noticed that so many of those old photos people look very stern. I have the feeling that they were told not to smile.

I love Wistful Wednesdays and all the old photos and stories. Thanks for sharing!
Peace,
Muff

I enjoyed your sharing these pictures. Thank you!

Those three beautiful daughters did make a charming photo.

My husband just lost an aunt who managed to live those hundred years. I imagine she saw quite a bit of change in her few years.

One of my grandmothers lived to be 104 years old. But she had no long OR short term memory and was like a toddler. I wouldn't want to live that long without my mind. Times have changed so much in the last century that it is hard to take it all in. Love seeing the old photos...and hairdos! :)

What precious photos. I enjoyed this post very much, Connie.

Wow - your grandmother must have been exhausted!

And those girls have the sweetest curls. Life has changed beyond recognition over the past century, don't you think?