My Aunt Anna had surgery a few weeks ago.  She is recovering at home. 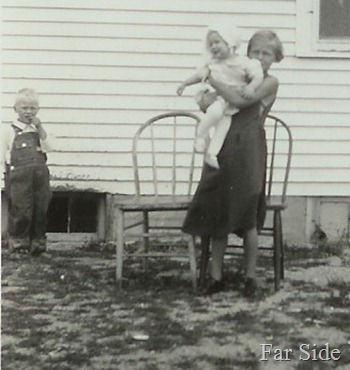 This was about 1936 when Aunt Anna was one year old.  Aunt Marie (8 years old) is holding her.  Uncle Arnold( 4 years old) is standing by.  It looks like Aunt Anna is struggling with Aunt Marie…they were the only two girls in the family..but they had a bunch of brothers. If you knew my Aunt Marie..she liked to be in charge because she was the older sister..so seeing Aunt Anna as a child giving her the “what for” makes me smile. 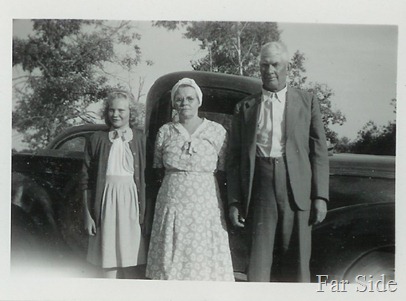 Grandma has on her huivi ( scarf) and Grandpa has no tie.  I am sure Grandpa is also wearing his long underwear as he wore them year round. 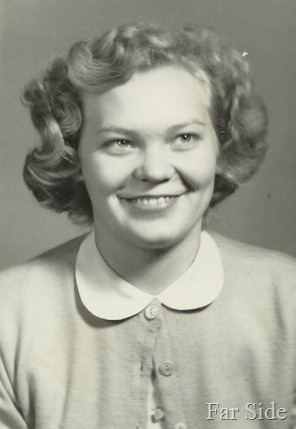 I think this is Aunt Anna’s High School Graduation Photo.  So that would have been sometime around 1953…very near the time that her Mother ( My Grandmother) died.

Aunt Anna will wear a body brace for about nine months until her back is completely healed.  She cannot bend forward or backwards or from side to side.  She cannot pick anything up off the floor or reach for anything over her head.  When we visited with her last week we told her that she is just going to have to ask for help when she needs it.

In less than two weeks I will be done with work and I can go over and help out.  I think “the cousins” were trying to work out some kind of schedule…there are enough of us. If we all pitch in it will work out just fine:)

God bless Aunt Anna. How terrible to be so confined for so long. She's blessed to have you and the family willing to help.

Aunt Anna is so very lucky to have such a wonderful bunch of nieces and nephews to help her out during her recovery. Bless you all!

Two more weeks. Already looking for something to do with your time, I see! She is very fortunate to have a hard worker like you in the family. That would be hard to bear, a back brace like that cannot be much fun to have to wear.

It's wonderful to have a willing family. That's not always the case. Wishing you aunt a smooth recovery.
Great photos, by the way!

I think there is just a hint of the devil in your Aunt's eyes and smile in the last picture!
I hope her recovery goes smoothly and that she isn't in pain.
We met a fellow in quite a neck brace - he is 4 weeks post surgery. He can't bend or turn his head at all - but, he says he has absolutely no pain - which wasn't the case before!

Interesting story told by the photos.
I wish your aunt a complete and speedy recovery.

Oh wow, 14 kids. My grandfather came from a family of 14 but dads was only 10 kids. It is something to have only two left right now.

Family is so important. Hope she gets through it ok. Wow that is a big family, I couldn't imagine having that many siblings!

Nine months! I bet that will seem like an eternity. Not sure how well that advice will sit with her. I know a lot of people who rile up when they hear, "she is just going to have to ask for help when she needs it."

What glorious old pictures. I often think that old family photos allow us to enter into the personalities of family members through a back door, to see them from a different frame of reference.