Last Monday evening the Historical Museum presented five local women who portrayed suffragists.  Women who fought hard and were jailed for their views of women’s rights.
They appeared in character and shared what it was like… 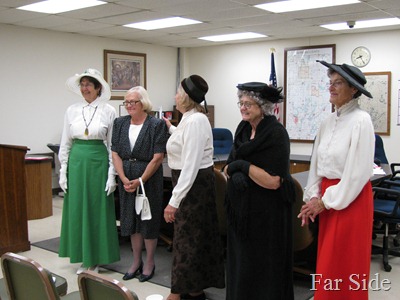 What it was like to be jailed for their opinion (never breaking a law), while jailed they were on a hunger strike and forcibly fed with a tube shoved down their throat. What it was like to have vegetables thrown at them, to be jeered at..to be looked down upon because you were a woman who wanted rights.

Women like Elizabeth Stanton, Susan B Anthony and Alice Paul. On a local level..Clara Uland and Coya Knutsen.  Brave, brave women who never gave up. 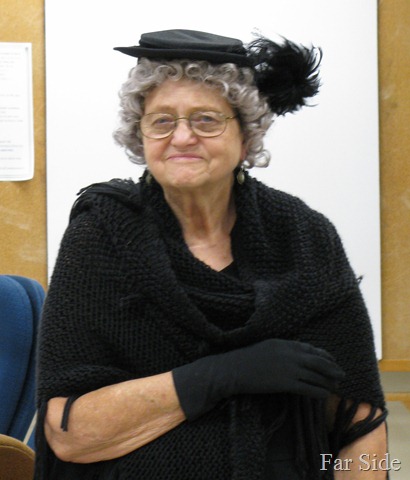 Last Sunday August 26 was the 92nd anniversary of the passage of the Nineteenth Amendment. "The right of citizens of the United States to vote shall not be denied or abridged by the United States or by any State on account of sex."

If you are a woman and reading this..I hope you exercise your right to vote in every election.  Forget about being too tired to stand in line to vote, forget about supper..drag yourself off to the polling place…or vote by absentee ballot…just vote!

These women did an excellent job sharing their views through out  history. Far Guy said he was impressed.  I was entertained..it was a great history lesson.  We had a good turn out..not quite as many people as the Sioux Massacre last month..but better than some programs  last year.

This week I am finalizing next years program schedule.  I have the days all chosen and the meeting place reserved.  I am fine tuning the program schedule.  Speakers have been called and asked to commit..luckily no one has refused.  The Chamber of Commerce event calendar goes to the printer soon..I want our full schedule to appear.

I am pleased with the programs I have chosen for next year..God willing and the crick don’t rise.   ( Some of the people in my programs are very elderly..one fellow will be 99 years old young.)  Don’t worry I scheduled him with two other musicians…hopefully they won’t all croak.  IF I am at the museum next year it will all be good, if not the new director will have something to work with.  22 days and counting down:)

You are to be congratulated for presenting such a historical program as Women's Suffragette. Also a big congrats to the women portrayers. Wish I lived closer so I could have attended.

I think about how different our world is today than it was then. To think that we had to fight and die for the right to vote! And these days women vote more often than men do. I would never miss a chance to cast a ballot! :-)

What a great idea. Sometimes we just don't remember that these rights so many of us now "take for granted" were hard fought for back in the day! Very fun!

What an amazing idea and such a great reminder that other women fought for what we take for granted.

What a wonderful program that was! I am sure that many do not realize that women did not always have the "right" to vote. My own mother was one of the first to cast a vote. How times have changed and we are standing on the shoulders of heros and heroines who fought to obtain our rights as American citizens.

A great program, and good for you for putting this on.

It's not something that many women think about, but it wasn't that long ago that we were not even considered any thing other then chattel for our fathers, and husbands.

We should be grateful for the trouble, and effort that these women have gone to. Can you imagine the lack of support from family and friends....the looks they must have gotten from neighbours, and all....

I was taught that if you don't vote, you can't complain...need I say more?

When I was a kid in the 50s my mother couldn't even get a charge card without her husbands permission. We were taught in home ec class in the 60s that if we wanted to keep a boyfriend we should learn everything we could about what he was interested in and not talk about ourselves. It was the days of remember to fix yourself up--do your hair, put your makeup on, change your clothes no matter how tired you were--to greet your hubby at the door with a kiss and a high-ball or a beer, whatever he wanted and dinner almost ready. This was many years after we got the vote.

I really like their outfits. It is great when a plan all comes together. If I am still around then I too will read about your events. I don't trust our crik either.

Wonderful program! Glad you mentioned Minnesota's Coya Knutsen...I remember her husband's "Coya Come Home" letter and how it was splashed all over the newspapers. Found out many years later the whole thing was a political trick to help her opponent. Grrr.

Sounds like a good program and congrats for getting ahead with next year's schedule.

That is an event I would have loved to attend.

Dramatized stories carry a powerful message. Good on you for using such a great presentation method.