News from a Friend

I communicate with a number of people by snail mail.  I have always been a good letter writer.  Some of my friends do not have computers and live simple unassuming lives. Sometimes I will mail them a copy of a blog.  More often than not they get one of my cards with a hand written note.  I have known some of the recipients of my cards since 1968.  That is a long letter writing history.

I have known Joan since about 1980.  Two years ago the love of her life died and two weeks later his faithful dog gave up..it was a double whammy for her.  We talked on the phone ..lots..and she knows I hate the phone.  She called the other evening.

That day started out just like any other..I headed to work.  Sometimes something I see along the way will set the tone for the whole day…like some “you know what” in front of me poking along at 40 MPH.  A fox in the field.  Pretty clouds..you get the idea.  It is 14 miles to town..so it takes me about 15 minutes..sometimes 20 minutes.  As I entered town I notice the ambulance at the funeral home..someone died or some one called them for someone that was not yet dead. I have never seen an ambulance at the funeral home before..the hearse yes..but not an ambulance.  I had an unsettled feeling all day long.

Far Guy woke me up from my Olympic watching after supper slumber..the phone was for me.   I did not recognize the voice at first..it was somehow familiar and somehow strange.  It was Joan.  She said I have news for you “I have been diagnosed with Lou Gehrig’s Disease, it has affected my speech.”

Could have knocked me over with a feather.  She had just returned from a cruise in the Mediterranean.   Here I was thinking that she was having a really good time and she did but as soon as she got home she started having muscle problems.  ALS or Lou Gehrig’s Disease attacks your voluntary muscles.  Your heart keeps beating etc..and your brain keeps working but you will have difficulty moving your arms and legs and swallowing and breathing..because even if those swallowing and breathing muscles are autonomic most of the time..they can be voluntary or somatic. ( You can breathe on purpose.)

The Doctors give her one to three years, much of which will depend on how fast the disease progresses.  Everyone is different.  The Neurologist says she needs a custom wheelchair and she has discussed her end of life wishes with all four of her Doctors. No ventilators and no feeding tubes.  She recently sold her home and moved into an apartment..so that she could travel more. Now that traveling will be in a wheelchair.  She was thinking of getting a dog, because she misses having a dog..but said “Now that is impossible, I cannot do that to a pet, who would take it when I die?”

What do you say to someone who is dying?  I said “At least you know who is waiting for you.”  “None of us know exactly when our time will come..you have some time to prepare”  and “I will miss you.”

She has no children, but she has two sisters and a brother and a niece.  She may move in with her niece..her niece has asked her to consider it.  I encouraged her to give it some thought.

I guess when you get older your friends start kicking the bucket one after another.  I am/was deeply saddened by the news from my friend:(

Now for the pretty picture. 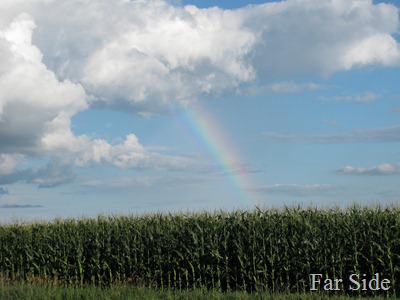 I'm so sorry to hear this about your friend. I was remembering mine and your dear blog friend, Pat, the other day. I still miss her even though she has been gone a long while now. These events make me appreciate every minute of every day.

That's a gorgeous photo you captured. Love you, dear friend.

Hope in a rainbow. Thanks for the wonderful picture.

That is so sad!

It was a tough day. The survivor needs to settle the feelings of shock before they can say any correct things back to the friend. You will figure out how to be there even if it is by mail and phone. It is such a short time for her to even figure out what is next. When I lost my friend at church in a four month period I really adjusted as each month went on. You will be a good friend to her through it all.

It is crushing to find out that a friend has a terminal illness. To me, it is a slap in the face - a reminder that we are all mortal. I didn't realize the course of ALS was so fast. (((Hugs))) to you and to your friend.

A quote from a man on Phil Donohue's old tv show that I have never forgotten...
"We're all terminal. Some of just know when."

So sorry to hear about your friend. Sometimes just letting them know you are there for them is better than words.

Keep writing letters to your friend, as she needs them now more than ever.

There also isn't anything to say to the victim's friend... ALS is such a cruel disease.

I am so sorry to hear about Joan. My husband communicates with a lifelong friend who also has ALS. He has been confined to a wheelchair for years now, and it's progressive. I am glad she has a friend like you. My heart is heavy...

I'm so sorry about your friend. My brother-in-law just passed away from that horrible disease last month. His was the "fast" kind and he lasted 18 months. We are all sad, but at least he is out of his pain and suffering. He will be missed but have a lot of good memories.

ALS seems to be a particularly cruel disease, but I guess there are no kind ones. Your letter-writing (or even short note-writing) skills will be very comforting to your friend.

So sorry! It's a horrible disease. I really don't even know what to say to you let alone the one that is dying. Be there for her.

Prayers go out to Joan and some for you to help you find the right words. I am so sorry.

I'm feeling badly for you and your friend right now. Memories of a girlfriend who called me in 2008 telling me she had breast cancer. She survived, but I remember the punch in the gut I felt when she told me over the phone. Enjoy your friend while you can... make all the memories you can with her. You will need them when she is gone.. HUGS!!

I'm sorry to hear about your friend and ALS. When your friend phones she wants to talk more than anything else and it's not necessarily her end of life. she has made her plans and in so doing has accepted her end. The rest of us also have to accept her end.

Oh Connie - I'm so sorry! Such hard words to hear, and to think how it hard it must have been for her to hear them. You are a good friend and I know you'll be very supportive for her. hugs, jo

So sorry to hear this. Dave's sister passed away from ALS two years ago. I'm glad she chose to have a feeding tube. She needed it for over a year. We miss her. Enjoy the time you have left with her. Ann

After all the foreshadowing and foreboding events of the morning, what unfortunate news! I agree with Beth--there never does seem to be the perfect words to say. Just "being there" whenever possible and in whatever way seems to help...

Your picture, reserved for the "last word," helped.

A moving piece. We too have just returned from a Med cruise (could we have been on the same one as your friend). Whenever I hear such news from contemporary friends, I always say to Isobel "Book another cruise". I am just glad your friend got chance to.

Your photo at the end was perfect. Shannon is struggling with her loss...I make sure I am there for her whenever she needs me...loss like this hard .... very.

Connie, this is so awful for your friend...all those losses and then this.

ALS is one shit kicker of a disease, it's pretty much one of the nastiest ones around. I know that's not helping, but maybe it will inspire people to donate to the research to find a cure.

Connie, this is a sad post about your friend, Joan, but you can also take comfort in being such a good friend. Too many times people have so many retreat that they should have called or written their friends before it is no longer possible to do so. I too have lost several dear friends way too soon, some unexpectedly. I will keep you and your friend in my thoughts.

Oh...I don't even know her but it brought tears to my eyes because a diagnosis like that gives no hope and without hope it must be very difficult to face each day. Another reminder to not put anything off or postpone! I'm so sorry Connie.