The pot of gold (en corn) 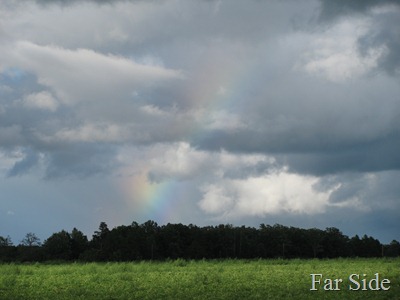 See that rainbow..we followed it here.. 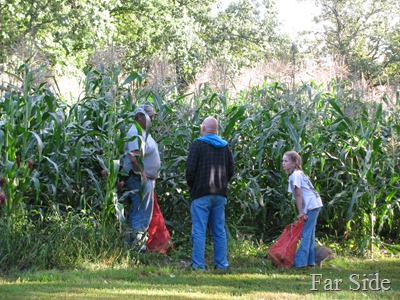 To my cousin Todd’s patch of sweet corn.  That corn must be about eight feet tall!

We got two bags of corn, six dozen ears.  We shucked, cooked and bagged corn all Sunday afternoon.  What a sticky mess..but it will be worth it next winter.

We had fun watching Samantha’s goats..they are a 4-H project. Children and goats were running all over the yard..it was great fun to watch. 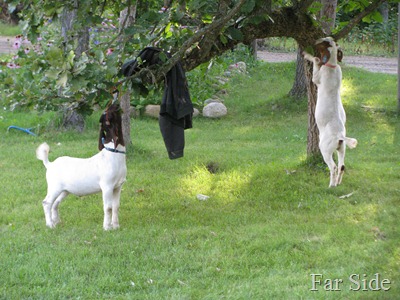 Chance watched from the car.  His door was open.  He did not get out of the car.  We hoped that he would interact with the goats or the young Border Collie named Jack..but he just stayed in the car and barked. Silly boy.

I am happy to have one batch of corn in the freezer.  We may do another partial batch..I have to count and see how many packages we still have in the freezer from last year.  Last year we did twelve dozen ears, the Grands all love it..so we share with them.

We cook the ears, then they are thrown in an ice bath, Far Guy cuts the corn off the cob.  Then I cook up a stick of butter, 4 cups of water, 3 teaspoons of salt and 1/2 cup of sugar..I bring that to a good rolling boil and then add 16 cups of corn.  Then I put that mixture into quart freezer bags.  I freeze them on cookie sheets..nice and flat.  When they are frozen I will package four to a gallon freezer bag.  That way I can grab four at a time and put them in the refrigerator freezer. Six dozen ears made 28 quart bags filled with about 2 1/2 to 3 cups of corn.   Yummy golden goodness next winter :)

That corn sounds really good, Connie. I have never seen such well groomed goats before. I'm glad you told me what they are or I would have thought they are a strange breed of dog! :-)

Oh gosh, do I love freezer sweet corn, its the best!! Are you experiencing really high corn stalks this year. We saw some on an ATV ride that were nearly 10 feet tall. All the rain and heat has to be the reason.

There is nothing better than sweet corn. My husband and I love it and we have a farm practically next door so we get some every year. This year the corn crop here in S.E. WI is very poor due to the drought. The farm has had very little corn and what they do have doesn't look very good - so we haven't had any to eat yet.

We did the same thing Sunday. Our farmer neighbors have a huge patch and share with us. My job is to get the board with the big nail sticking through, the electic knife and go to work. Then bag the product for the freezer...:)

I've always frozen the corn after parboiling and cutting off the kernels. Your recipe sounds yummy. I'll have to try that - when we get home, if there is still some good, fresh corn left!

Yes we have a board with a nail too..no electric knife though..your operation is high tech! :)

YIPEEE!!! You had a rainbow also! Finding rainbows makes my day...seeing your rainbow adds to my day!

I just learned how to make it in the microwave. Apparently I'm the last person in the U.S. to find out about this!

The other evening my husband brought two ears of sweetcorn into the house and told me that was the entire crop! Its been that dry here. This will be the first year I've not frozen sweetcorn. Good thing I have some left in the freezer from last year.

Your recipe is similar to the one my mother used; however, she cut the corn off of the cob before cooking. She used an angel food cake pan - the ear of corn perched on the center tube so the cut corn would fall into the pan - no real mess. Here's the recipe: Cut 4 quarts of corn from cob. Add 1 quart water, 1 cup sugar, and 4 heaping teaspoons salt. Boil lightly for 10 minutes. Cool and pack in containers to freeze. Do NOT drain the corn. This is the only way I will eat frozen corn. My mother named the recipe: Delicious Corn

Oh my I can almost taste that corn that you put up, it is wonderful! Chance is smart if a doggie is not sure of their surroundigs they don't move at all..smart doggie..Love your blog read it early, you live in a wonderful area of the USA not crowded and you do get fresh produce, fruits, nuts andI think I read meat too? wow whee, it is sweltering hot now in our area it is only about 30 days of sunshine and blue skies, then rain, more rain, snow probably this year and ice..one has to enjoy moss it grows everywhere, but temperatures are mostly temperate, not like most of the country whereby all the crops are done for and wheat, rice etc. has been severely affected..drought conditions almost kill all farmers crops! enjoy your busy weeks...hope you and your hubby are feeling better!!!!!!!!!!

You inspire me....my Sister and BIL have sweet corn, we have been eating it for a few days now. But I never thought to freeze it, lol.

Maybe next year? The little freezer we have is pretty full right now.

Got me drooling all over my desk now. I love corn especially fried with butter. Unfortunately I can't eat corn anymore - sad face. I know your family enjoys when you pass out some of those bags of corn.

Good sweet corn has been scarce with not having a whole lot of rain, but I sure hope we get a chance to get some before the season is over! The goats looks so funny trying to reach up in the tree!

I am envious! Corn is one of my favorites. You two are smart to put up all that corn for later. I love your new header - beautiful!

Very industrious and what good eating this winter. You are right, grandchildren sure love corn.

And I do like corn. Sounds like a great recipe. I've never tried it before.
I grow a few corn plants in my garden.

Nothing quite as good as fresh corn.

Tender sweet corn is wonderful!
We had some last night that we bought on Sunday at the market. It was picked the day before the market. It was pretty tasteless and we didn't like the texture, so the chickens got most of it. In April we had some corn when camping with our in-laws, it was from California, and who knows how long since it had been picked. I was totally shocked when it tasted just wonderful, how corn should be.

Oh, you are making me so homesick! We get no decent corn down here. Last year I was able to get few decent ears at the grocery store but not in bulk like you...no corn on the cob stands around here! I used to do the same thing...raised my own too...Silver Queen...that was in the day before the sugar and cream varieties. This is good though...you're motivating me to pack up and get back North A.S.A.P. Know anyone that wants to move here? This whole town is full of Northerners! LOL!