I had a wasp chasing me around the yard. I think he was deranged.  I finally stomped on him.  This time of year the stinging creatures are so aggressive..the cold nights must do something to their brains.

I found one wasp dead in the birdbath..there must be a nest someplace nearby. 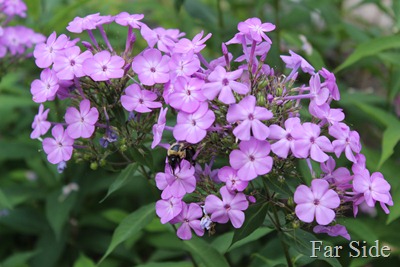 This big old Bumble Bee is collecting pollen like there is no tomorrow.

I chased a Monarch Butterfly around the yard.  It would not land long enough for a photo.

I had to soak some Birch bark for my project.  Well Chance’s pool was available..boy was he upset with me.  He got in the pool and took out my pieces of Birch bark..one by one and then stared at me…..it was one of those “I cannot believe you had the audacity to put your stuff in MY pool.”  I had to get out a cooler to use for a soaking container.  The bark comes from dead trees, it will kill a live Birch tree if you strip off it’s bark.  I have been known to collect pieces of Birch bark that fell off a logging truck.

Does anyone care to guess what I make with the Birch Bark? :)

I know who 'rules the roost' at your house. Way to go Chance, keep 'em in line!!!

Did you make paper from the birch bark? I think Chance realizes you were trying to take advantage of his bath. He knows his rights!

Good for you, Chance. After all it is your pool. We have been bothered by wasps and hornets here.

I'm with Chance on this one and Baron concurs. On the other hand, anyone seen chasing butterflies around the yard can't be all bad!.... :)

Oh thanks for the giggle , Chance and his pool soo cute ! The wasps here are the same but all around my nectar feeders , they drive me nuts and the poor hummers . I have a home made wasp trap that I made near the feeders and every week all you can see in it is black wasps in it just full ! I put some nectar in it and they go nuts and well get trapped and they send out a signal to the others and well they get trapped and on and on ! I think I have had an entire colony in it ! Have a good day !

Well, I don't think it's a canoe, although they have been used for that before. Some sort of craft? Picture frames?

Poor Chance, talk about territorial, Boo would be just as insulted as Chance was, lol.

I have wasps around here, one chased me all around the garden, and I am very allergic.

A canoe!! Love the new header - the best ever. Chance's antics crack me up on a regular basis; he is a sweetheart. He knows his rights.

Chance is the master of your domain.

I have no idea what you use the bark for. I am waiting to find out.

Can't wait for a picture of your craft. I have no idea. Ann

I have no clue, but will be waiting with bated breath! The bee's have been really bad here we find hives every where! The honeybees come into the garden pond along with the wasps for drinks!

Haha. Chance is funny.
I would guess paper or a boat of some sort, too. Can't wait to see!

Chance is a dog just after our hearts!!!

Gee, if you made a canoe you could paddle away from it all!
But I'm thinking it would be nifty to paint on. Or, maybe you made cones that could be hung and filled with flowers.

Chance cracks me up! Actually sounds like the type of thing Karma would do...and with attitude, too. ;)

There are so many things you can make with birch bark...humm? A basket? That would be so pretty. I've seen wall holders for dried plants that were gorgeous. You'd better show us now, too! ;)

I can just see Chance with a rather disdainful look on his face. I'm not going to guess what your making but I know you'll do a great post on it.

are you making a basket - sounds like fun. I've seen some that are really nice. A big frame for a mirror in your bathroom would be really neat too -
Chance is part human I think - So funny - just like a kid. leave his stuff alone!!

Chance cracks me up! I'm guessing you're making bowls out of the bark.

Are you making bark tea?

I have seen a couple of monarchs recently but the butterflies just didn't show this year. Your phlox looks well watered even if it is headed for another hot day.