Gus the ghost is getting pushy

On Thursday when Far Guy worked for me..he encountered Gus.

Yes, he finally felt the presence.

He was moving boxes into the side storage room in the basement…when all of a sudden he was pushed..and fell to the floor.  PUSHED.  He could hardly believe it..

He is a believer now.  I think he has doubted me..when I have whined about the ghost. He now realizes that I am not “nuts” or if I am he is “nuts” too.

Now he has his own personal “Ghost Story” to report to the children that will listen.

**Gus apparently did not like the clowns that were a former directors collection.  All the boxes of the stupid clowns are now at home in the space where Gus hung himself so long ago.

The Museum is not a storage facility..for “collections” of a personal nature.   I have stressed that over and over to the Board Members.  The clowns do not have accession numbers or records.  They have no historical significance to Hubbard County or to the State of Minnesota.  They were taking up space..space that could be used for many different historical objects that do hold some history of our area.

Now they are in Gus the ghosts space..I expect he will move around a bit and become more mischievous for a little while.  Perhaps I should ask for hazardous duty pay:) 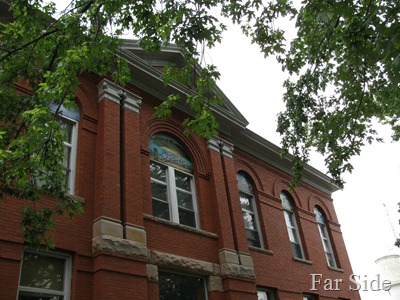 **Gus/Peter the person, was the boiler operator in the courthouse.  He had only one arm.  His son was killed during WWII. Gus/Peter became depressed and hung himself.  Children walking  by saw his body hanging in the basement window and one of the Courthouse employees was alerted.

Oh my! Ghosts in museums that mess with people. How sad about Gus. I wonder how his spirit can be set free...

A sad story.... hope he doesn't harm anyone.

You should have an exorcism to set Gus' spirit free. Hope Far Guy wasn't hurt.

Poor Gus.
Those board members are stubborn folks, aren't they?

Maybe you could have a talk with Gus and ask him if he could please not try to hurt anyone . I wonder why he is still there and hasn't crossed over and whats keeping him there ! Or bring in some one who can help set him free !

CLOWNS!? How does that fit in...someone wanted to get rid of their collection is all. Maybe you could sell them on ebay and make a tiny amount of money? Or the thrift store might want them? OR you could use them as prizes for visiting? Oh, yes, I forgot. Directors...they do have a way of stopping stuff.

Goodness - I'd be too scared to go to work! Jo

Poor Gus, and poor Far Guy for getting the brunt of Gus's frustrations. Don't you wonder what might happen to the clown boxes while they are in Gus's quarters. Wonder if they might just be pushed over, or something heavy dropped on them. Have a restful Sunday.

What a great story. Glad that Far Guy was not hurt!

Now you have someone else who believes...good for you...Tell Gus 'HI' next time you're there...He is probably pretty lonely if no one speaks to him...

I hope Far Guy is okay and you better get your best ghost busting gear ready if you stuck those clowns in his space!

I agree! Sell them on ebay or Craig's list or something. I don't blame Gus. He knows they don't belong there. But to take it out on FarGuy, that's just not fair. ;)

What a sad story - but exciting to have your own ghost.

Wow, I'm glad Hubby did not get hurt. Gus is still running the place looks like.

Whoa - at least now you can feel vindicated!!!

I believe. That is the same way I got a broken hip, either pushed by an evil spirit or ghost.

Maybe FarGuy thought this up to see if Melinda Gordon (Jennifer Love Hewitt) would come by to whisper to Gus......