This is what I made..no not a canoe and not even a Christmas tree ornament. 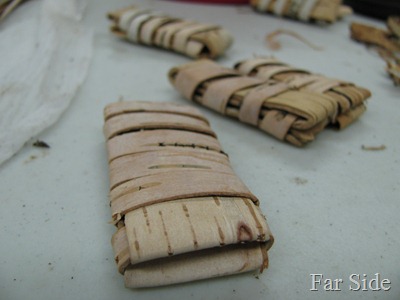 Dave was painting on his Pumpkinseed Fish..he is so very talented. 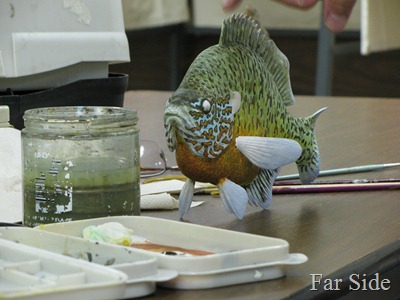 His fish is carved from Basswood.  He will paint on it for hours and hours.

I taught the birch bark lesson to a number of people. All woodcarvers. Any ideas yet? 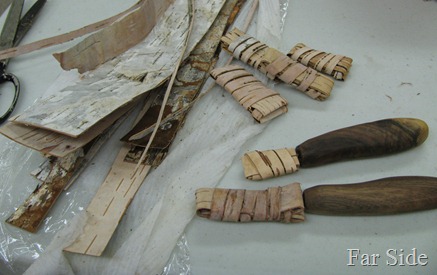 I take a piece of bark four times the length of my knife blade.  Imagine the half way point and fold the two ends toward the center, then fold in half again at the center point.  Then I take one of the thin strips and stick it into the bottom end and then go round and round until the sheath is all bound together..to end it..I cut the last of the thin strip a little short so it tucks into the top part nicely. Wallah..you have a handsome looking knife sheath..so your carving knives edges are protected and so are your fingers when you are searching for just the right knife in your carving bag.

You can custom make the sheaths for all your knives. All my knives have Birch bark sheaths.  Most of Far Guys knives do to..but he has a fancy smancy canvas roll knife holder that my Aunt Anna made for him after he made her a special carving knife.

Yes, to answer your question Far Guy still makes carving knives..but he always wears his gloves since he had that unfortunate accident and severed the tendon in his finger. After the surgery and rehab..his finger still doesn’t move like it should..but it does move..some..which is better than no movement at all.

I am glad to have this project behind me…it was something I said I would do..and now it is done!  I am working on carving a snowman and Far Guy is working on a rose..we have to come up with a Christmas Ornament to carve pretty soon:)

Well, isn't that perfect? I love the ways you make things out of stuff that other people would simply discard. And it's a good thing to have those blades covered like that! Excellent! :-)

That is great. Wonderful job!
Hope you all have a blessed Tuesday. :o)

Very clever! You amaze me with your wonderful and clever ideas.

That is a very slick idea! I'm so jealous how talented you and Far Guy are it is awesome.

Much more practical than a canoe! Glad to hear FG uses a glove during the manufacturing process...we don't want any more slips like that one. Give Chance a hug for me.

You have so many interesting talents and hobbies!

Dave's fish is a masterpiece.

I'm really happy my life has slowed down enough for me to check in on what you have been doing. It is interesting for me to follow your many projects. The knife sheaths are interesting, useful and made of bark in a way I never would have thought of. Chance is an interesting dog, one of those who are more than "just a dog". We have had dogs like that, too.

Perfect! Just perfect for you carvers. I am impressed. :)

What a cool idea! Can't wait to see your Christmas project!

I always look forward to your Christmas ornament each year.
I love your new header. Very nice for early Autumn!

What a grand idea, where did you learn that one?

Add me to the list of those looking forward to seeing your Christmas ornament, it's always delightful.

Okay...learned something new with this one! Useful idea.

Time is moving on if you're thinking of what to carve for Christmas.
So I told you you'd tell us in the nest post what you were making. The sky's the limit when it comes to what is done with birch bark.

Pretty neat, I do say!

Great idea! Should have guessed! Good protection for those very shart knives!

What a great way to keep yourself from getting stabbed.

What a great idea - and it looks so pretty too!

Hey, that's pretty cool, and I doubt anyone other than another carver would have guessed what they were.
And that fish carving, it's just amazing.