This is a photo of Far Guys Parents and his Great Uncle and Aunt.  This is another photo from the trunk upstairs.  I think it was most likely taken in the 1940’s. 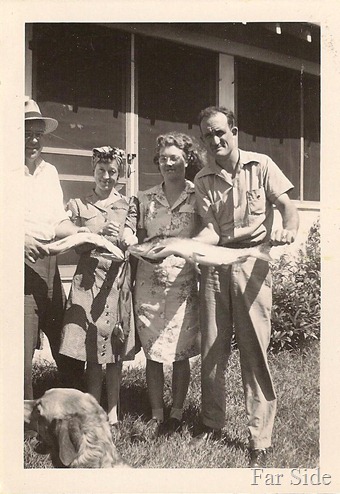 Uncle Herman, Aunt Charlotte, Evelyn and Marvin..and the dog Lady or Tippy (I cannot tell them apart) the photo was taken at Grandpa and Grandmas farm.  (Herman was Grandpas youngest brother.)

This may have been the fishing trip where Far Guys mom got all the fish.  She didn’t fish much when she got older because she got seasick real easy. 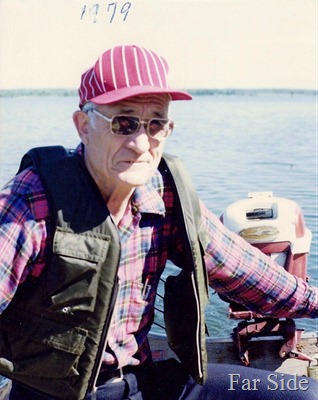 This is Far Guy’s dad.  The photo was taken in 1979 well after he retired. He went fishing all times of the year.  He liked winter time fishing the best..it got him out of the house and it seems like all his record setting fish were caught then..perhaps that is because he had more time to fish. 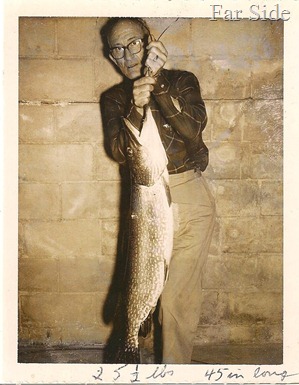 I think this is the largest fish he ever got..a Northern weighing in at 25 1/2 pounds and 45 inches long! Now that is a fish!

His 98th birthday would have been last Monday..but he has celebrated the last eighteen of his birthdays in heaven.  He died in 1994 shortly after his birthday.  Eighteen years..how can it possibly be that long ago?

Other than fishing and hunting..he liked to read the newspaper, listen to baseball on the radio, play solitaire and look at maps..he had an Atlas next to his chair and could be immediately transported to another state and tell you the best route to get from here to there. He liked to argue politics with whoever would argue with him.  He liked a good conversation with differing points of view.  Often times if Trica was argumentative we would say “Call your Grandpa and argue with him!”  He could spend hours looking at all the new cars when they came out for the year. He liked big cars..Lincolns and Chrysler Imperials. Red was his favorite color.  He loved fried potatoes and he learned to fry his own the year that Far Guys Mom had her hips replaced.  He had the hiccups for well over a year after his heart surgery..the only way he could get them to stop was to chug down some ice cold Fresca. He liked to watch TV “All in the Family” was one of his favorite shows..and Police Woman with that sexy Angie Dickinson. He watched “General Hospital” every day with Far Guys Mom.  If one of them would miss “the story” then the other would fill them in on the happenings in Port Charles... they even managed to get me interested in the happenings during the “Luke and Laura” era.

I have lots of good memories. He was a fine man and I was blessed to have him for a Father In Law:)

What a nice recollection of your FIL. It is amazing how fast time goes by. Happy birthday to him up in Heaven.

Oh, those were some great stories about your father-in-law! The photo with the fish, it looks like it is so big that it is pulling him over:)
Just imagine how much fun he would have had now, looking at Google maps. At least I think he would, as I love looking at maps, and can spend a lot of time on Google doing the same thing.

Wonderful memories and some great fish!

Great memories of Genes dad! I knew who he was, but didn't really know him. Sounds like Gene is a bit like his dad.

I love old photos. What wonderful memories they give us.

Sweet memories of your fil and I love the photos. Oh yes, Angie Dickinson....she turned a few heads in my family, too!!!

He sounds just like my father who has been gone for 16 years now . You have some lovely photos and memories there ! Have a good day !

I was smiling the whole time I was reading this. Wonderful memories!
What is it with pictures of kills? Whether it's a fish or a deer--people love to take pictures with their kills--LOL! That was one big fish, though! :)

What a wonderful set of remembrances. Incredible how fast 18 years can fly by.

Great tribute and well said. He had a way of life that was very pleasant.He kept things simple and under control...even the conversations.

I love fishing, too. My favorite times with my dad.
Wonderful post. ♥

That is one large northerner. I use to catch them from the lake. It seems like it was a long time ago when I would drag a line all over the lake. Your father in law sounds like he was a great guy. Time does go by to quickly.

You are the BEST storyteller. If you ever write a book I would read it over and over. I love to hear stories about honorable people and simple lives. When I hear your stories it reminds me of my relatives and "the good ole days". I pray if I make it to heaven that it will be just like those great memories of ours.