Stranded Not Once But Twice

How do you get to see your other baby brother or get invited in for coffee at the neighbors? 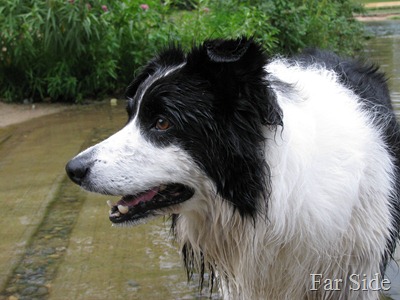 Last evening Chance and I wanted to go to the lake..so we did..Far Guy drove.  He proceeded to lock his keys in the car.  Luckily he had his cell phone in his pocket.  My other baby brother ran by our house and grabbed the extra set of keys. Chance was off leash.. I didn’t grab his leash out of the car because the public landing was empty.  He was entertained by splashing water and luckily no leash was needed.  My other baby brother delivered the keys.  We headed home happy to have been rescued. I guess I need to have another key made and put it in my camera case.

A storm came up just before dark.  Lots of thunder and lightening.  The phone rang.  A neighbor down the way reported that one of Steve’s calves was in the road. She wanted to know if she could help..Far Guy said “Bring a rope”  ..of course she just laughed.  Far Guy, Chance and I went to see what was up.  Steve and Jo were not home but we located them by phone.

We found the calf..Far Guy opened the gate for the little devil..and he just ran the other direction…of course.  We talked to Steve on the phone some more..as we left for home (because the calf will most likely stay close to the other cattle) ..maybe..not this wiley creature..here he was in the middle of the road again.

We wrangled him with the car..he was not a bit afraid of the vehicle..if I would have had a rope we could have rustled ourselves a steer.  We set up watch on the side of the road.  Far Guy ran out in the rain several times to wave the flash light and holler “Get back in the fence” (Like that did any good.) We kept the calf off of the road and out of harms way. His Mama was bellering for him..the lightening and thunder was most likely scaring him..and the fence is electric..and there are weird lights and a guy hollering at the poor little thing..talk about over stimulation.

Steve and Jo came home..and when they checked the little monster who should be named “Steaks and Roasts” had jumped back in the fence with his Mama.

NOW whilst we had been sitting there along the road..Far Guy kept turning the car ignition off and on.  We needed the lights to watch out for the escapee.  Our battery went dead.  Stranded twice in one day.

Steve found his jumper cables and we got the car started and went in for coffee and a visit.

Moral of the story: it is good to have neighbors and relatives that will help you out…us country folk have to stick together:)

Poor little guy--he must have been terrified.

Stranded twice in one day! That is a record for Far Guy, I hope. I don't think I've ever heard of anyone else getting a calf into a car! Glad all's well. Steaks and Roasts is a great name for that little guy! :-)

What a story. I do believe the calf suffered the most. I am glad you are all safe!

What a night! So glad everything worked out for the best. The image of FG hollering at the calf made me giggle!

In my experience, cattle (calves included) do not "see" open gates. That is, unless you don't want them to see them. Glad that all turned out well.

Maybe Chance could have gotten the calf back in the pen. Isn't that what Border Collies do? I know it must have been horrible for you, but I really got a chuckle out of it!
Peace,
Muff

Small town Minnesota for sure.. Been there don that.... :)

This story sounds just too familiar. I suffered with you as you told the two tales. Doing the right thing with the calf was great. I am sorry that the rest of it happen. They were glad to give you coffee for that deed. I hope not to have too many of those kind of days but they do seem to keep happening. Take care and get more copies of keys.

There was a fire call at the same tme as the dumb calf on road call. Lightning had hit a power pole and set it on fire. That would have been more fun.
FG

Too much excitement for one 24 hour period! But still glad for neighbors and relatives!

Wow, that's a little too much stranded-ness. You're right about small towns and helping one another.

Surprise ending to your story. Good you have people to rescue you.

Yes, we have wonderful neighbors and friends. love ya both and Chance!

Family and friends, some of the best life has to offer.

Wow! What an adventure! That little guy needs hobbles!