Far Guy and I had a date night.  We dropped Chance off at his sitters ( granddaughter Madison.)  He got to play ball, stare down a cat, he ate a tiny frog and a cat whopped him on the nose…he was exhausted when we picked him up after the concert. 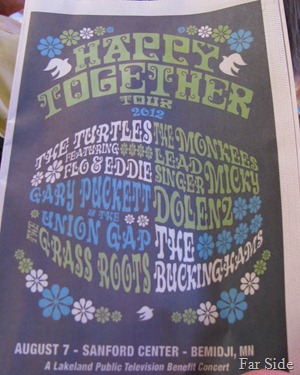 The Buckinghams ( Kind of a Drag or Hey Baby/They are playing our song) were entertaining but really REALLY LOUD.  My ears were ringing.  I screamed at Far Guy “They must think we are all old and deaf.”

The Grass Roots (Midnight Confessions) was really loud too..my ears really hurt.  I was sure I had busted an ear drum.  Far Guy offered me our tickets to wad up and put in my ear.

Then came the guy I was waiting for Gary Puckett (Young Girl).  What a huge disappointment.  He does not have a bucket to carry a tune in.  OR perhaps my hearing had been damaged by then.

Thankfully there was an intermission to get up and stretch.  Then Mickey Dolenz ( The Monkees and Daydream Believer a salute to Davy Jones.) That was okay.

The real show finally started with Flo and Eddie or the remnant of The Turtles..they were hilarious and very entertaining.  Real showman.. they in themselves could have their own show.   Of course they are known for the song Happy Together.

Me and You, and you and me, no matter how they toss the dice it has to be..how is that for an old ear worm? 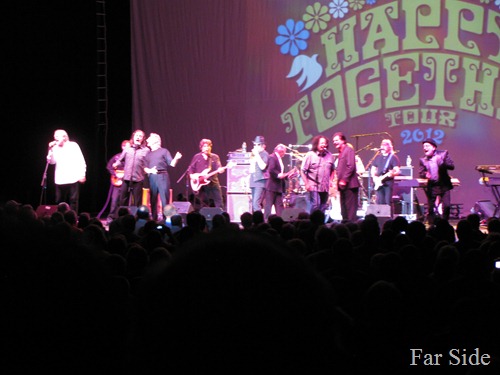 Here are all the old guys at the end..one of them said it perfectly.  “If I had known I was going to live so long. I would have spent more of my youth getting high.”  Of course in the geriatric crowd that was there..we could all agree.

The backup band was loudly awesome..I am sure they cringe when Gary Puckett comes on stage to sing..perhaps that is why they play so loud..if not their sound guy should be fired:(

Labels: Date Night, Just Me being Me, thoughts

Loud music really hurts my ears! Glad you two had a night out but I know Chance was glad to see you again! That mean old cat should not have swatted Chance!

Oh how fun. My kind of night with my hubby. I'm sorry to say I kinda' need loud nowadays.

My ears cannot take loud music or anything else that is loud. I always take a pair of ear plugs to any concert I attend. Sounds like a fun night with Far Guy. I love going to concert where the artist are from my era (oldies). It is amazing how some of the artists are still really good and others should have retired years ago when they could still carry a tune, haha. Happy you and your hubby had a good time.

I have the old records, cannot stand the loud music, my hearing is shot I guess, my eyes are going too..ha sounded like you enjoyed yourself!!!!!!!! I agree with you Gary Puckett should have retired a long time ago, you know those fellows never saved one damn dime or they would not be going out and playing now..High I worked when everyone was inhaling and paid for school and was with my grandma who was in her late 80's this in southern california...I thought people who wasted money on marijuana were nuts, we needed every dime just for food, rent, utilities! Hoping Chance doesn't get swapped by any kitty cats at all, he is such a good boy..Enjoy your oldies but goodies at home on your stereo if you have one!!!!!!!!!!!!!!

I even carry earplugs when I go to the movies, since sometimes the previews are so loud they hurt my ears. Wouldn't even think of going to a concert without them. Everybody must be deaf already and they don't notice... Sounds like you had fun, though.

Hilarious concert review! This show will be at the Iowa State Fair tomorrow night.

I'm in the "can't stand loud anything" line, too. Glad you and FG had a great date. My dau was a huge Monkees fan. Ooof, I'm old! I'm also glad Chance had a night out. At least the cat didn't leave claw marks. Good for the kids to see how the other half lives!

I'm jealous. I would have loved that concert. Kind of a Drag is one of my favorites. Love the pot joke at the end. I'm so glad you had fun, and now you have me singing Kind of a Drag in my head, and it won't go away!!! Oh well at least its a song I like.

I used to love a concert. Not so much now. I loved your review of the concert.

You must have been at the Sanford Center - what a great facility - not a bad sit in the house. I agree with the loudness - we went to Blake Shelton (ahhh) the first concert there and it was awesome but needless to say the concerts since we have taken our ear plugs...

Oh what a great concert . Glad you enjoyed it ! The Monkeys ,I still love their music to this day ! My fave song is , Last train to Clarksville . Have a good day !

I'll be singing these songs in my head all day long (but very quietly!)
Peace,
Muff

Cool Concert!!! Would have enjoyed going with you...Gordon Lightfoot's singing technique has changed also...almost thought someone else was singing his songs on the last CD I purchased of his...

Glad you enjoyed it, even if it was too loud (why do bands do that!!!) and that Chance enjoyed his time away also...

I loved the Turtles! They were happy together when our boys were little and we used to sing that song.
Sorry to say I don't remember any of the other bands except The Monkees. I don't understand why they have to "volumize" their sound!

I love all of those acts. I went to see Gary Puckett years ago (1968) when I was in college. We left at intermission along with many others because he was so bad. I think he is tone deaf.

We saw James Taylor a few months ago and he was still wonderful. Just him and his guitar.

I don't like music that is too loud, either, but looks like you had a great time!
Glad Chance had a good time, too. ;o)

As soon as I read the title I started humming! Loved that song and still know all of the words. I think hubby may have been cringing at my version!
LOL about their playing so loud cause the old folks can't hear!!
It sounds like it was a great concert.... for old farts like us!

Now you have me humming tunes all night. There's a reason why they call them Golden oldies...they are wonderful.

You had a whale of a concert. We were brought up with quiet music however I do like the loud stuff.

That sounds like my kind of concert. Love all of those guys. The Monkees were my fav growing up. I swooned over Davy Jones. Sounds like you two had a good time and Chance - well better luck next time Chance.

I can't handle loud anything except the t.v. because you can't hear talking but then the ads come on and it blasts you to kingdom come! You are so right! What is up with the kids listening to loud music when they have good hearing and us not liking it and everyone assuming we can't hear? I have one bad ear from when I was young but I can't handle the loud music. So fun though that you guys went! Unfortunately all that old music has memories for me and my "ex" so it just doesn't have the same meaning anymore! LOL! Glad you got a chance to experience it though. I watched one on PBS one time and couldn't believe how old they all looked! LOL! Obviously I need to check my mirrors!