In our area it would be impossible to have a paid Fire Department.  We rely on Volunteers.  Well trained neighborly volunteers.  I was a Volunteer Firefighter and EMT years ago, I am retired.   Far Guy has retired twice,  because day time is so poorly covered he is on call during weekdays.

I am not sure that the general public knows that these guys work day jobs and then at night when the pager goes off summoning them to a call, they roll out of bed to go on a rescue call or a fire.  Rescue calls are usually short, in two hours you can be back in bed..can you sleep?  That depends on the call and it’s outcome.  Fires are the pits, I hated Fire Calls..sometimes it takes all night to put out a fire. Then you spend a couple more hours washing hoses and disinfecting SCBA’s.( Self Contained Breathing Apparatus)   In the spring brush fires were the worst..you can have many a day until it greens up.

Sometimes you are just sitting down to supper and the pager goes off.  Sometimes you are in the shower, sometimes you have company.  This area is a fairly busy when it comes to calls..I don’t know the exact numbers but they respond to about 200 calls a year..that would be about four calls each week.

Saturday night we were invited to the annual Fire Department Dinner.  Salad, Cheese and Crackers, Meatballs, Mashed Potatoes and Gravy, Green Beans and some kind of desert that Far Guy thought was heaven.

My other baby brother got a Ten Year Pin..time flies..he was a Volunteer Firefighter in Wyoming too, before he moved back here. 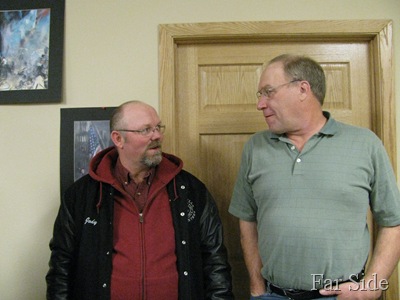 My brother Jody on the left and Ken who was chosen the newest Firefighter of the year! If you ever have occasion to be in a bad situation..these are two guys that you want on your side. They are also wonderful leaders and mentors to the younger up and coming firefighters. 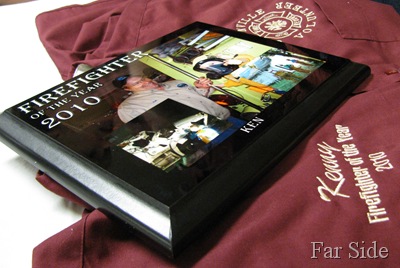 Volunteer Firefighters and members of Rescue Squads are some of the real unsung heroes in small communities:)