You know what they say about small towns..they need our business.  They cannot survive without our business.  We live in a touristy area..many of the restaurants close down for the winter.  We have lots of tourist shops you know the kind..candy shops, book stores and shops with all that crap from China..some are closed for the winter and some try to keep their business afloat all year round. 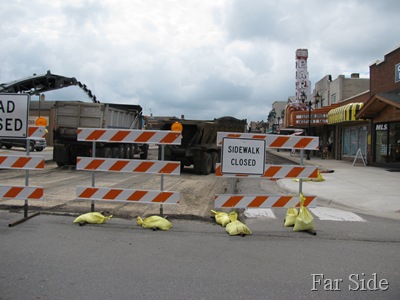 Now our small town did the unthinkable to it’s downtown businesses last summer.. construction..what a mess.  Two years ago they closed main street off because of construction to the main highway..so for the last three years they have had only one year of decent business. 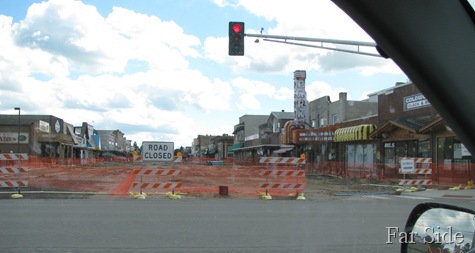 Every business was assessed for the sewer and water work that was done. 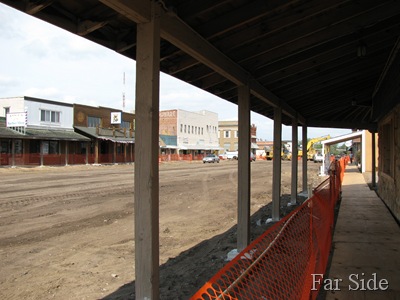 This is the sidewalk from the south part of Main Street on August 30, 2010.  The city fathers thought it was important to have a walk way for all the shoppers that were showing up on Main Street.

Next summer they will be doing all the side streets. 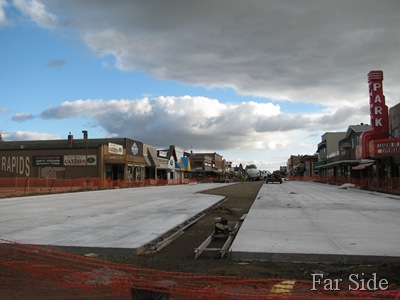 In all of these photos only the first one shows construction workers actually working. The photos were taken on various days, at various times when we just happened to be driving by on our way to the grocery store. The construction company in charge of this project was slower than molasses in the wintertime.  They could have put up lights and worked 24 hours a day on this project. The City Fathers and Mothers should have insisted upon it.

Main Street opened again in late November..the small cafe that we used to frequent raised their prices..the Hallmark Store where I used to shop has been sold and a women’s clothing store will take it’s place. Just what we need a store where you cannot buy anything under 50 dollars.

I don’t know if you noticed or not, but the Movie Theatre  did a face lift of the outside of their building during the construction..then they closed for major renovations, what used to be one huge theatre is now three small ones. Their 3D theatre is not open yet..but the others are..on Tuesdays you can go to the movies for 4.50 each..on Mondays it costs you 6.50 but you get free popcorn.  Some things are still a bargain on Main Street.  The last time were were at the movies we took the grandboys to see “Kung Fu Panda”..I think that was back in 2008:)