In Minnesota when it stops snowing and the skies clear you know that is is going to get cold.  Last night it was –6 below and than as the morning progressed it got colder instead of warmer at 8 AM it was –10F or –23C.

Once it gets below zero the number is not so important except to the locals..everyone wants to have the coldest temperature in the area.  I don’t know where they buy their thermometers at or where they get their glasses from..but it is not the same place I get mine. 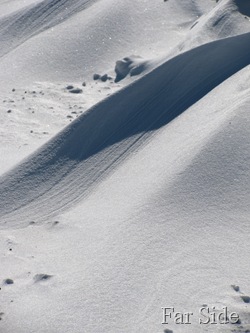 Back in 1957 and 1958 when I was in first and second grade, I  walked to the end of the driveway to catch the school bus.  My Dad would walk with me in the winter.  He would carry what I have always called an Indian Blanket, a warm colorful blanket. I think that some mornings he carried me through the deep snow drifts so that I wouldn’t get all snowy and wet before school.  While we were waiting for the bus, he would wrap me inside the blanket and hold me close to shield me from the wind that came off the prairie.  Dad also shoveled that entire driveway by hand. The driveway was over 600 feet long ( Far Guy measured it on Google Earth.)

I recall some of the dirt roads in our area being just like tunnels when you drove through them in a car, you could only see forwards or backwards. They were one lane tunnels too..if you met another car someone was going to have to back up.

Along the road to Osage the snow drifts would be almost as high as the telephone poles..it was rumored that some of the kids would run up there along the drifts.  I remember scratching the frost off of the window in the bus with my fingernails, or just making fingerprints all in a circle to melt the frost or getting really close and breathing on the glass to unthaw it enough to see out..just to see how high the snow banks were.  I always wore my snow boots to school and I might have been wearing a dress but I still had my snow pants on underneath:)