Back in 1964/1965 I was in Junior High, eighth grade to be exact.  I joined band when I was in seventh grade.  I wanted to play drums. Every kid in the country wanted to play the drums, you just had to buy your own wooden sticks, no major investment.

I really didn’t want to learn to play an instrument. I just wanted to be in the Marching Band and be a majorette.  I wanted to wear some cute little outfit and twirl my baton.

I never learned how to read music, I just kind of guessed what notes were in the ballpark.  I was tone deaf..I could not tell a sharp from a flat.

I was in the Junior High marching band.  We practiced twice a week in the evenings, I learned how to march. I could even play a few notes while marching..not all of them..but a few. We had to memorize the entire song, no sheets of music were allowed.  Our Junior High Band Leaders were both  kind men. ( We had both Mr. Evju and Mr. Wood during those years.)   We marched in two parades a year..the Memorial Day Parade and the Homecoming Parade.

I tried out for majorette for three years..it was just not in the cards..I would only be a majorette in my mind.

The summer before tenth grade, the Senior High Band Leader gave me summer lessons.  I made him so angry that he would holler and get all red in the face.  He hollered at most of the kids, except for his favorites.  I had enough hollering in my life and when it came time to pick my classes for tenth grade..Band was not one of my choices. I was a band drop out. 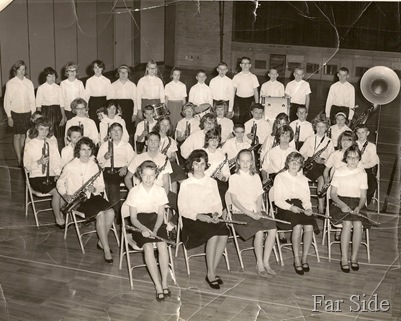 Back then kids were placed according to their skill..there are 12 coronet players..I am eleventh out of twelve..My good friend Trudy wasn’t so hot either. ( I am in the fourth row second from the left.)  My very first date was with the young man in the last row 5th from the right..his name was Bobby he was a drummer, he used to come with his Mom to buy eggs at our place. See that gal in the second row on the left with the saxophone..she was in a band with her parents..she had natural talent.

I often think back and wonder what made the Senior High Band Instructor so angry?  Did he get some weird perverted satisfaction from making young girls cry?  Well not me..I might have bawled afterwards but I would not give him the satisfaction of seeing me bawl during a music lesson:)