The snow was starting to get that all used up dirty old sock look. It had shades of brown and grey, some spots of black dirt were seen momentarily in the nearby fields. I said “Well that won’t last.”  It didn’t.

It snowed most of yesterday and there are still a few flakes floating around yet this morning. 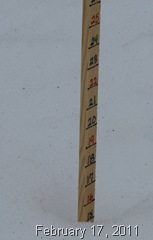 My snow stick shows a gain of a little more than an inch of wintery wonder, that has now covered the icy spots that were left after the melt and made them more slippery than snot on a door knob. 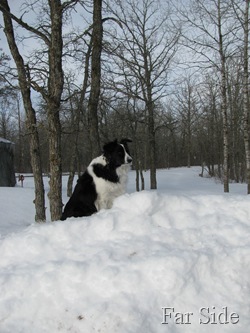 Would you like to guess? Should I carve something and then give it to the person that guesses closest to the day?

What day will my florescent green Smokey Bear ruler be free of snow and ice when it is placed on the ground next to the snow stick?    Leave me a comment with your guess…only one guess per person..so make it a good one.  A warm rain could wipe out that snow stick in no time at all.. a snowstorm could add to it’s days.
Now what shall I carve..you will just have to wait and see:)