Years ago even if you didn’t go out every Saturday night..you went out on New Years Eve.  It was a unwritten rule. No one stayed home on New Years Eve.  You got all gussied up and went out..usually meeting relatives or friends, for supper..some dancing and more than likely a little bit of drinking. 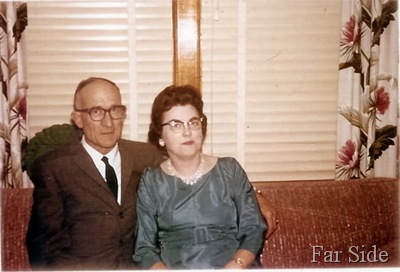 In the late 1950’s Far Guys parents were all dressed up and ready to go out..someone else took this photo with a different camera. It must have been Uncle Jimmy or Uncle Ronald. We get a rare color look at the couch that I have described previously as beige and those hopelessly wild flowery drapes, the venetian blinds and a pukey looking green corduroy round pillow.  We get a look at Far Guys Dad when he had a little hair remaining on his head.  This was before the big comb-over..you know when the men grew their hair long on one side and combed it over the top of their head to cover it and it made them look like they had a little hair..except if they took off their hat in the wind. Far Guys Mother is beautiful in a brushed satin dress and her earrings and necklace match.

If I could see more of the photo..Far Guys Dads shoes are perfectly polished..and his Mom has on black leather pumps..dancing shoes:)