Happy Anniversary to us!  We made it to year 41.  We were young when we got married, I was barely 18, Far Guy was 19.  We were best friends first..seems like that worked for us..either that or we took the love, honor and cherish part seriously.

Our parents set a good example.  This year my parents celebrated 60 years of marriage.  My Mom was almost 21 when she married my Dad who was headed to Korea when he was almost 24.  Far Guys Dad was 25 and his Mom was 24 when they tied the knot back in 1940.  They celebrated 53 years together in 1994 before Far Guys Dad died. 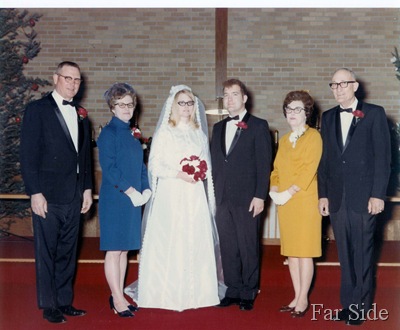 Our Parents on December 20, 1969
We may go out for supper this evening..it depends how Far Guy feels..he is fighting a terrible cold.  We already decided where we will go..a local Steak House that is open all winter. ( That may sound foreign to you..but many eating establishments are closed here during the winter..they are open for the summer only.)
Last year I wrote that we were going to go someplace. Well as it turns out the farthest we got from home was Grand Rapids, Minnesota or Grand Forks, North Dakota..maybe this year! I told Far Guy this morning that we were turning into our Grandparents, My Maternal Grandparents made it as far as North Dakota a couple of times.
Last year we got a beautiful ornament from Steve and Jo for our Anniversary… 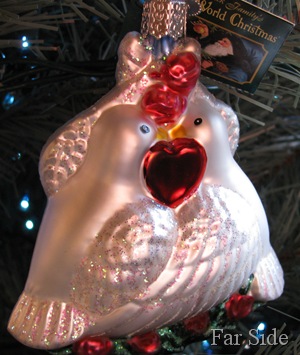 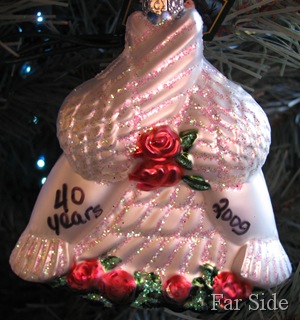 Sheltering each other with their wings, sitting in a bed of roses. It doesn’t depict that our wings get all ruffled up sometimes or the times when we rest together in the thorns wondering which thorn is going to bite us in the butt next.
Jo marked the ornament for me, it has been placed on the downstairs tree..that is still not completely done…I still have a little time.
More Wedding photos are located here and there is one here too:)
Posted by Far Side of Fifty at 10:45 AM