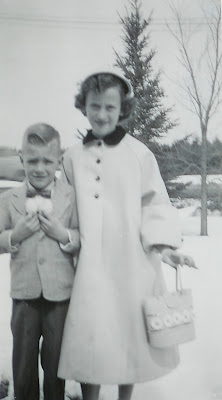 Easter in 1956,  Far Guy is holding the eggs really gently..his sister has a new coat and hat..and looky at that wonderful little handbag.   Far Guy would have been six, his sister was almost eleven.  It looks like there was snow that year for Easter...usually we have snow for Easter..it makes the egg hunt pretty easy.

This year we will bask in the brownness that our early spring has brought.  Warming our wintery bodies in the warmth of the sun, opening the windows at night and hearing the birds singing in the morning.  Hiding eggs that will show up in the dead grass.  I am not complaining, if it is a really cold stormy wintery Easter..you have to hide the eggs inside the house.  One year when Jacob and Rachael ( Nephew and Niece) were little the eggs were hidden inside the greenhouse..a toasty warm place for an egg hunt.

I remember the eggs that we used to color on Saturday, that adorned our baskets the next morning..and would be found in a big soup bowl on the center of the table by the end of the day.  I never cared for hard boiled eggs..especially the ones that were cracked and the dye would seep into the egg mirroring the crack that was found on the outside.  The smell of vinegar would linger in the kitchen..and the memory of trying to hold your egg under the goop the longest for the wonderful dark colors, trying to achieve a perfectly colored egg.  Attempting a two toned egg..one color at one end..another at the other..never being able to achieve it..because you only got to practice once a year:)
Posted by Far Side of Fifty at 11:17 AM

Good morning Connie. I have many of the same memories. But we didn't have to make a decision of where they were to be hidden. The grass is usually greening up pretty good and uncut this time of year. My kids and I use to try so many different things with the eggs but the best is the memories I have.

It all sounds so familiar. Seems like every year I'd get some fancy, new Easter dress and shoes have to cover it all up with a heavy coat and forget the shoes altogether. I'm free to get back into the old traditions again and will be digging up my Mom's old recipes tonight.

Eggs hidden inside or out are all just as fun! I love coloring the eggs with the grandkiddos. We always have so many neat and unusual eggs. I always attempt to color the perfect egg with the perfect design. Someday baby!!

God bless and have a wonderful Wednesday!!!

Always fun to color eggs. Have been known to do it even now by myself with no kids around!

We moved from the real eggs to the use of candy eggs that had the harder sugar coating with soft centers. They could be hidden all over the house because of their size. I love Easter candy!!!

What a great old photo! Love it. Growing up we never had egg hunts, but my son had some and now it's the granddaughter. Such a great delight!!

I found an old Easter photo which I will put up on Sunday... I love the picture and yes, coloring Easter eggs is something every one of us has probably done.

Oh, Far Guy's sister looks a lot like me at that age--right down to the hat. Every year we'd get a warm couple of days, I'd buy a new pink straw hat, and Easter Sunday would be a return to wind, snow, and cold.

You're right about the lingering smell of vinegar, and how awkward our efforts were!

Those were the days. I have pictures, and an old movie, of my brother, me, and my cousins in our Easter finery chasing poor little pink, green, and blue chicks! I still can't believe they dyed the live chicks different colors for Easter.

I miss wearing the hats - - - bonnets - - - those made it feel like Easter because it was about the only Sunday we wore them. It's a wonderful holiday!

What a lovely old photo! We hunt for chocolate Easter eggs - no doubt in the snow once again this year.

Love all those eggs in your header!

We always went on little vacations over Easter weekend so we'd find out in the morning if the Easter Bunny found us at the beach, in the mountains, in the desert, etc. Being in California, it made for a variety of really fun egg hunts!

I have a picture of my mom and me taken Easter Sunday...I wonder where it is!! Thank you for posting the nice picture!!