Fifty six years ago my status as an only child, something I am sure that I excelled at, came to a screeching halt. My brother entered this world during a cold winter day and then it stormed for an entire week, at least that's what my Mother says. I was only two and a half years old. I occupied the only child space, and he was the one that shoved me out of my comfortable spot. I began a very important job, I was the big sister. 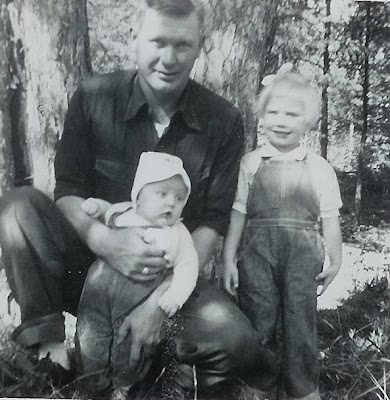 My Dad with my brother and me in 1954.
I should have made him play dolls and have tea parties or girlie games. Instead we played baseball and softball, playing hours of catch. His baseball mitt was formed perfectly, mine had a big wrinkle in it where the ball rested. I think he used to stand and practice throwing that ball into his mitt in front of the mirror. The second born could get by with that. We played basketball, practicing dribbling moves and shots from impossible distances. We threw the football, I was never very good at that, he had to teach me how to spread my fingers over the pigskin surface for a great throw that would spin in the air. If it had a ball in it, my brother played it, and taught me how to do it, sports came easy for him. He knew all the rules, I am not sure how he knew all this sports stuff..he just did.

In later years, when he got his own room with twin beds he also got the homemade curtains with the horses on them. I used to lay on his bed and covet those curtains. I had some boring beige fiberglass curtains that did not stir my imagination in the least. His curtains were filled with wonderful steeds that could dash you off into wonderful daydreams, he didn't even like horses. He would only get on the cows old bony backs if I insisted that his life was never going to be the same again if he didn't do what I told him.

He hated doing chores in the barn, there was no doubt in my mind that he would never be a farmer. He used to sit downstairs on the bench changing into his barn clothes ever so slowly. Mom would holler "Hurry up son" He took his sweet time. I can still see him with his head lowered sitting at the bottom of the stairs..with his barn shirt in one hand in great contemplation, he was a deep thinker and his life revolved around sports. He could be heard mumbling "I will never be a farmer." There was no sport in being a farm kid. If he had been a town kid he would have been off playing whatever neighborhood game was going on, forgetting to come home for supper. Instead he was stuck on the farm, daydreaming of sports.

My other baby brother, Far Guy, my Mom and my baby brother
( January 2010)
In his retirement years, he will probably Coach or Ref or Umpire. One thing is for sure, he won't be farming, although I have tried to talk him into grapes or an orchard. One thing he did very successfully was age.. would you look at that silvery grey hair..perfect..If mine was like that I could forget my trips into town for highlights! Happy Birthday to my baby brother!:)
Posted by Far Side of Fifty at 10:04 AM

You have an attractive family. My husband would be jealous to have hair - - any color!

A wonderful post and happy birthday wishes to your little brother! I love the story of the horse curtains!

Happy birthday baby brother. You look like you were the proud big sister, Connie. How very sweet you look.

My mother wanted me to have a white french provincial bedroom set but I held out for wagon wheel bunk-beds.

Have yourself a glorious day and God bless :o)

Happy Birthday to your baby brother.

What a gorgeous silver mane he has! Have a great day, baby brother!

And I love your memories of when you were kids...

What a priceless picture. Adorable baby, very cute little girl and a handsome dad. And what a nice grown up family photo too. Your mom is so sweet looking but with a sharp eye, did you develop that in her or your brothers?

So we are both the eldest child. I was also thrown out of the spot of being the only child by my sister. She is my best friend now, and I take back all those things I said to her when we were little. What great pictures, and I agree, his silvery hair is awesome!