Ice Cream and Other Adventures

Jen , Andy and the boys came to visit.  Andy was attending a Firefighters Sectional School nearby.  He is also a volunteer Fireman.   Jen and the boys arrived.. I asked Adam  how the trip was with "Little Elvis"  he replied " Just fine, no peeing, pooping or puking along the way."  Now to an eight year old that is a very successful trip with a new puppy!

I was reminded of his mother and his aunt when they were little girls.  I believe that Trica started it, and her little sister picked it up ..if they were upset or angry they would say "Poopy, Potty PEE." in a sing song kind of way..that they would take turns repeating louder and louder until I would say "Enough girls."   They would still carry on in whispers each trying to get in the last word..then they would dissolve into a fit of giggles.  Now if they were teamed up..they could really shout the PEE part, if they got some of the neighborhood children involved in their "non dirty word" sing a thon..it could be quite embarrassing.  They finally outgrew it..at least I think they did. 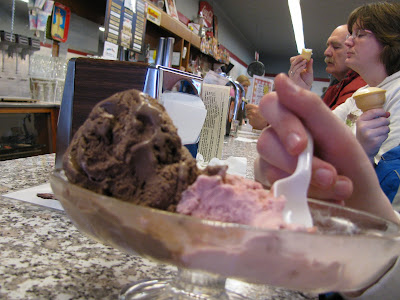 Anyway we all went on a little "Grandma Adventure"  that I will tell you more about on Tuesday.  After that adventure we went to The Minnesoda Fountain and had treats.   Individuality was the word that comes to mind... Far Guy ordered a fountain Coke, the rest of us had Ice Cream..the flavors..White Cake and Ice Cream, Vanilla, Black Cherry and Chocolate, and Maple Nut were chosen.  Yup, you guessed I am the nutty one! 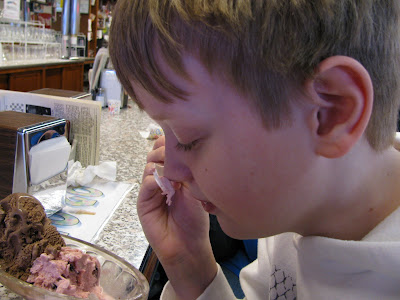 Noah asked me, "Grandma why do you always have that camera?"  I replied "So I will be ready anytime you do something wild and crazy! "  So he put ice cream on the end of his nose! :)
Posted by Far Side of Fifty at 2:07 PM