I knew it was too good to be true, this morning we woke to some of that nasty white crap in the air again.  Good thing I didn't put my parka away.  The ground is getting white, Chance didn't stay outside very long.  He retreated to the bathroom to sleep, and deposit all the sand that was locked into his fur from his early morning romp. He has no job until Far Guy gets up. That is when his day really begins.  They have to play ball and play chase me games, they might run errands or walk to the mail box or take the garbage to the dumpster, then the dog will want Far Guy to lay down and rest.  When the Fire Department Pager test goes off at 6PM it signals that someone should be cooking some supper. Talk about habits, the dog practically wears a watch.   If Chance needs to rest during the day, he takes up his post right in front of the door.  There is no sneaking out without him. 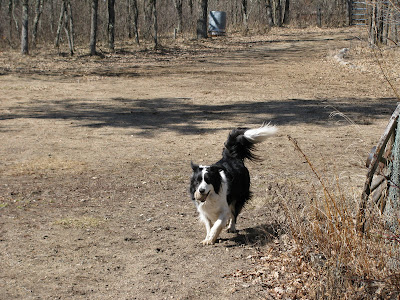 He has become a creature of habit just like his master.   When Far Guy gets up, he gives the dog a milk bone biscuit.  ( Dogs that only eat once a day are more prone to twisted stomachs..and this is one way to prevent it.) Far Guy read that once..and since then Chance gets his treat every morning.  Far Guy starts his coffee, then he heads for the bathroom..after that the coffee is ready.. and he sits down at his computer to read the morning news and to really wake up.. he yawns repeatedly.  Then the dog lays his head in his lap which is a signal that he needs to go out.  When he is done outside, he paws on the dining room window, he can see inside. so he knows when you are headed for the steps to let him in.  He then waits patiently for Far Guy to make peanut butter toast and cereal.  Chance gets some crusts that have been dredged through the peanut butter, some mornings he drools so heavily on Far Guys leg that clean up involves a towel.

I prefer to watch my news rather than read it, and in my waking up stages I will watch CNN or the Today Show or BBC News..if I am up really early I will watch Imus in the morning.  I usually have plain toast, and share crusts with Chance too..but I usually make him work for them.  He doesn't like to be petted on the head while waiting for toast...so naturally I must pet him in between his crusts. It was a war of the wills when I discovered that petting him while he was focused irritated him and he would back away.  He wanted the toast crusts but on HIS terms. He did not get them. He had to allow me to pet him in-between, he was quite stubborn about it all. When push came to shove, he wanted the toast!

Yesterday I worked in the yard. I was on poop patrol. I cleaned it all up. Now the next time it rains..the grass can be really clean.   Chance and I had the usual spring "poop in the woods" talk..he gets a little lax during the winter..and just goes where the snow is removed.  He can go back into the woods again.  I hate walking through the yard and seeing dog poop..it is unsightly and unsanitary.   I informed Far Guy that he should also have a "poop talk" with Chance guy to guy.  If you have a dog or dogs ..now is the time to go on poop patrol..unless of course you brave the cold winter weather to clean up after your dog everyday.  Cleaning up after your dog is just one of those things you do because you are a responsible pet owner:)
Posted by Far Side of Fifty at 10:05 AM

Actually no - I don't pick up Buddy's poop. My place is so big you'd never find any unless you spot him going. I have never walked in poop in my yard from Buddy.

Buddy has his routine too. He expects a dog treat when he completes his business outside. He will sit and look at me or sit in front of the TV.

TMI on the dog poop.hahahaaaa

We Border Collies are pretty smart. You can pet me any time you want - with or without a treat! But Higgins is more like Chance. Focus, focus, focus!!! Maybe it's a "guy thing"?
Most of the time we make the Duke do the poop patrol thing. He's pretty good at it :)

Hope your weather warms back up!

Java gets the ends of the bread loaves that cut off too small to use for anything. I'm still feeding her twice a day because she seems to work it all off and is already too thin. Java is hoping the daily walk habit starts up soon as the days get longer. No snow here but it sure looks and feels like it's coming.

Our neighbors Ok and Mo are getting snow this weekend. We are getting a chill and rain.
Patsy

Barney sits to the side of the refrigerator and looks up. If we aren't paying attention, he moans just a little and does this glance up and shake of the head up to remind us where the milk bones are. We have some rob roy's up there that he really doesn't like and I give him one of those just to walk him work it. He will carry it around the house half the day then eventually will eat it when he knoww the milk bone is going to happen. I have already had the scooper out for two dogs. It was tough year with all the high drifts so I had to clean up in area that I have never had to be before. Riemans Gardens is small, so not worth the drive. The arboretum in St. Louis is worth any drive.

Tiger the Wonder dog goes out of the yard to do his business. 'Didn't have a talk or train him to do so...he just does and it makes me :o) that he chooses to do so. Want me to send him over for some doggie chat???

We are pushin' up toward 70 this afternoon then the bottom falls out and snow tomorrow and Sunday. Enough!

God bless and have a fabulous Friday!!!!

i keep my winter woolies on deck all year round here .. .sigh .. tho it'ssupposed to be plum balmy this weekend:)
gp

It's a good thing you are a responsible dog owner. On my Saturday walks, we have half a dozen dogs, and all the owners know to bring at least two plastic bags and there are plenty of places to put full bags, rather than carry them around. Here in Bellngham, I've seen people chastise dog owners who don't do their duty, plus it's against the law here.

Sometimes I think you and Chance are twin souls. You both take care of Far Guy and you both are strong willed.

Our dog uses the farm fields. If I find poop on the grass he gets the talking too, he understands.

LOL sound like much the same as it is here. Routine is good and a dog will hold you to it. I'm having the poop talk with the crew today now that you mention it ;)

Well you already know what happens to my pooch when he gets snacks. No more treats for sad eyes. It still doesn't stop the drool machine from happening while we eat. Sometimes he leaves puddles on the floor it is so bad.
We already did the poop patrol. I wish there was a way to recycle the stuff. I would be rich.

Poop patrol....what poop patrol - I need a Big Stinker (actually 3) to follow each dog around and swoosh them out of the yard each time they want to make a deposit.... Oh for poop... I have to wait for it to dry then I'll work on raking it... Please please can I wait until it is dry? :)

Funny how dogs get into their own routines,all mine have them. I had to laugh when you said poop patrol, there is a lady who lives close by that has a business and that is the name of her business. I guess she is hired by people that are to lazy to clean up after their dogs!
Have a blessed evening,hope it doesn't snow too much.

Oscar always goes in the woods. Now he is injured, and on the lead all the time, it is easy to clean up after him. However, you need to come and give that poop talk to everyone over here.

All owners who haven't been able to find their dog's poo in two metres of snow just had to leave the snow. Now that it is melting, the pavements are just awash in the crap! Doggie doo is a sign of spring over here! ;-)

I mean they had to leave the poo in the snow... (Sorry - early morning here!)

With 3 dogs, the poop piles up fast... I went on the spring poop patrol a few weeks ago. Two entire wheelbarrow-fulls were dumped out in the pastures. What a job... since then, every other day I go on poop patrol. I don't want any close to the house. I want to be able to walk out in my slippers when it's dark out and not fear sliding on my butt...

It is amazing what creatures of habit dogs can be... and Tori Mae has taken to sleeping either in front of the back door, or at least in the "traffic way" so that hubby cannot sneak outside without her!

I've taken to watching Good Morning America lately... not sure why. I guess since I'm not working. I rather like my morning routine the last few weeks. A leisurely getting up, feeding the dogs, taking them out, feeding the horses... life can be good. :-)

I have never had inside dogs ...I really enjoyed this post. Didn't know dogs were such creatures of habit!!

Sorry you had a recurrence of snow. We are headed for a stretch of rain but that means no frost and that means I don't have to put the plastic back up each night on the hoops. I sure hope your spring gets back on board and sticks, I've been really enjoying mine, I could almost change my mind about spring (it is my least favorite season, like fourteenth on the list)