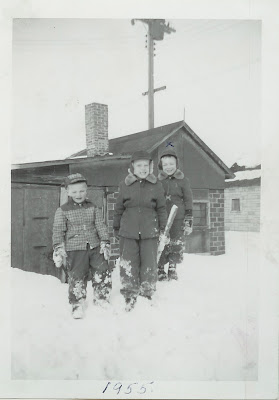 This is a photo that Far Guys Mother saved.  She put a little x above her sons head.  The other little boys remain a mystery.   I asked Far Guy if he could remember...he was only five..so I guess not.  This was taken in the winter, obviously, in front of Hazels house.   Hazel was a shirt tail relative.   Every fall when Far Guy was sent back to Park Rapids with his sister to start school.  Hazel would take care of them.   He loved Hazel, but he hated her cooking.   Hazel made lots of vegetable soups..Far Guy will not eat vegetable soup, and he usually fed his to the dog..a tiny little chihuahua. That poor little thing was often subject to vomiting and diarrhea for some "unknown" reason.  Every fall Hazel would knit Far Guy a pair of mittens, even when he was a teenager she knit him mittens.

Sarah (Sally) and Ruth were Hazel's teenage daughters..they often babysat for Far Guy and his sister.  We see Sally in town quite often..she is a Great Grandma now.  Ruth is coming to visit next summer, she wants to see Far Guy. The connection to our family is through Great Grandma Martha Jane Aleck. Hazels father was Martha Janes brother ( John Xaver Aleck who moved into and began farming in this area in 1912.)