Chance and I went on an adventure on Tuesday. We went down to the river..just one mile away.

Last year this culvert was washed out, this year the township has repaired the road..and hauled in some fill.   I pulled over to the edge of the road..not exactly a heavily travelled road..no one came by during the twenty or so minutes that we spent there.  Chance is only allowed to view from the car.  He was quiet..watching..
The first thing that I noticed was a brown hump..I knew right away it was a beaver.  I took two photos through the passenger window before I got out of the car.  I was certain it was going to plop into the water, perhaps even splash it's tail and disappear.   There were a pair of Canadian Geese on the river and a pair of Swans.  The Canadian Geese took off just a honking.  The Swans kept swimming around.  The beaver stretched out and became less humped up.   I cautiously went to the edge of the road...beavers can be mean..it was obvious to me at this time that this beaver was either ill or injured.  I leaned up against the car and watched.  I was ready to get back in the car or hop up on top of the hood if the beaver came toward me.
Castor canadensis or the beaver is a rodent.  They usually weigh  40 to 50 pounds and can chew through a six inch tree in fifteen minutes or less.   Beavers make dams and create more wetlands..they are the ultimate builders.  Trapping season is open until May 15th in Minnesota.  There is no limit to the amount of beaver that can be harvested.  Drowning or killing traps must be checked every three days.  Foothold or snare traps must be checked everyday. 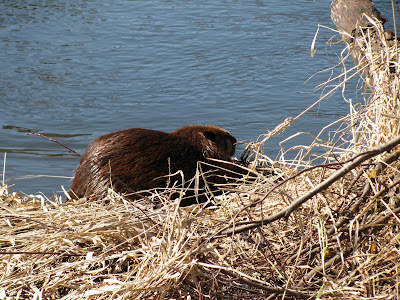 Chance and I drove home and got Far Guy, I wanted to see what he thought.  He thought it was in a trap.   We consulted with several experts who felt that the trap was probably one left over from a winter trap line.  Perhaps the trap was iced in and the trapper was unable to remove it..so he just left it, or perhaps someone is trapping..either way it is illegal to mess with anyone else's traps. 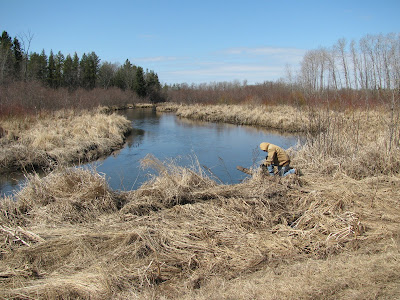 We went back the next morning..Far Guy confirmed that the beaver was indeed in a snare and was dead in the river.  It was very sad, and to me it seems like an inhumane way to die..trapped, unable to move until you either drown or succumb to the elements or starvation.   Years ago when we lived on the lake, neighbors on either side of us used to dispatch beaver to beaver heaven swiftly when the beavers began to wipe out their little trees.  One well placed shot, and the beaver did not have to suffer for days. We just let the poor things have as many trees as they wanted along our shore..they were just looking for materials to build homes with.
I respect the trappers..but I suspect that this one left a trap and forgot about it..either that or if he was actively trapping..he was not following the rules.  I will ask around and find out who was trapping that part of the river..whoever it was is going to get just a little piece of my mind about following the rules, or a gentle reminder to count all his traps and go back after the iced in ones:(
Posted by Far Side of Fifty at 9:42 AM