The snow is disappearing rapidly..those rains really helped to obliterate it. There are some snow banks left but for the most part the yard is clear. Chance found a whole collection of his balls, one of which was his favorite.. a blue ball. I don't know what the deal is..apparently he can see blue better than other colors. This is a really early thaw for us.. at least two weeks early. So I will call it a tenuous spring..we are certain to get more snow. I would bet on it. It will probably get below zero again too. March weather can do anything..it is not to be trusted. 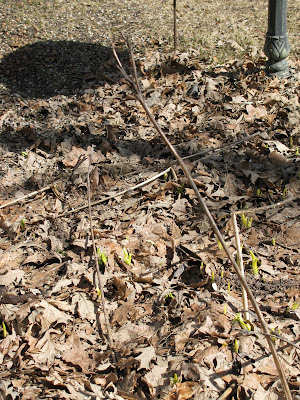 My stupid Day Lilies are up, the line that runs underground from the outdoor wood stove to the house keeps their roots cozy all spring..so they poke their noses out sooner than they should. They won't bloom until mid July anyway..so it is not worth getting too excited over.

The sun finally decided to shine late on Tuesday eleven days with no sun..It nearly blinded me. I sat outside a long time yesterday soaking in that warmth. Today the weather forecast is for 50 degrees..unbelievable!! The frost has gone out, and all the excess water in the yard has disappeared. 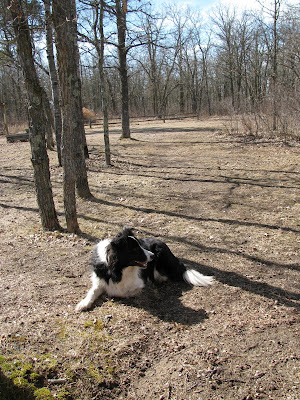 Chance and Far Guy took off with the Pedometer to measure different walks..distance is important to him. He gets bored with the equipment inside the house. The Phoebe's are here..I can hear them but I never see them. Their "Phee-bee" calls are good to hear. They eat bugs..and the deer ticks..the little itty bitty tiny ones are out..we know this for a fact..Chance had two of these dastardly ticks crawling on him on Tuesday. I had one on the table stuck to a piece of tape ready to take a photo but Far Guy threw it away. There will be more..doggone deer anyway..they are part of that tick life cycle that brings them into our yard. We have stuff to put on Chance..Frontline..I hate to put that crap on him but it is the least of the evils with all the tick borne diseases.

So my early signs of spring include balls lost in the snowbanks magically appearing, itty bitty deer ticks, no standing water in the yard, and Eastern Phoebes. What are your early signs that spring is coming?  How do you know when it is here for sure?  In Minnesota it is the first Robins that I see in MY yard that makes it official:)
Posted by Far Side of Fifty at 12:23 PM