Above the rest and a Mission

In the corn field across the road from us one corn plant is growing above the rest. 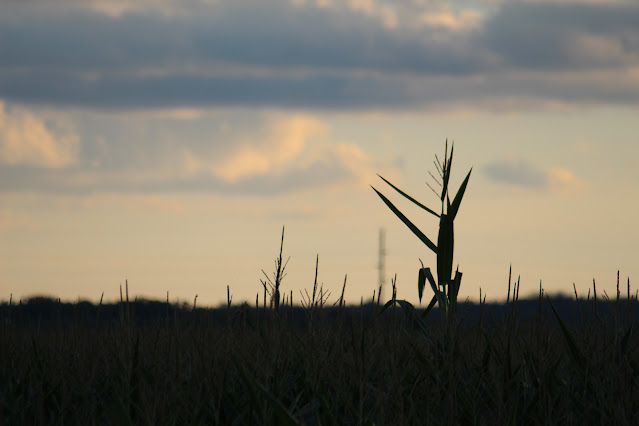 It must have been a vigorous seed or got a whole bunch of fertilizer.

Far Guy has been on a three day mission.  There has always been a tree at the side of our walk, a spindly little thing when we first moved here....it grew.  It has been in the way for 24 years...

Far Guy attached a come a long to it and a neighboring tree and stretched it out.  He dug around the base.  I said "You should cut it off and call Steve to come grind that stump."  By this time it was a challenge.  Jen came over to take Senior Photos of Hailey...so she dug on the base of the tree, tightened up the come a long, and chopped at roots.  They watered the ground to soften it up.  They discussed possibilities...using Tilly...they decided that may not be a good idea.  Yesterday we borrowed another chain from my other baby brother...after a couple of straps were busted.  I dug around the base...Far Guy chopped at roots with an ax.  Far Guy tried pulling it out with the Ranger.   After a while I got in the Ranger and pulled on the tree from all directions, moving the Ranger slightly each time and pulling until my tires would spin and just like that the tree came out of the ground....It seems I twisted the tree enough to bust it off under ground level.  We drug the tree into the woods to be cut up later, filled the hole with black dirt and planted grass seed.  Three day mission accomplished.

Labels: area crops, Around the yard

That is an awesome photo!!

How many Far Sides does it take to remove a tree? All of them!! Team work got 'er done.

Wow! That sounds like a huge task, well accomplished!

That was a lot of work. It's a good thing it worked, someone would have been grumpy!

That corn stalk is standing proud.

Persistence! Determination! Actually that was a clever process.

That sounds like a whole lot of work! You'll be justified for a few days off now.

That took a lot of work! And reminds me to pull any seedling trees I see now rather than later. :p

I'm glad they decided not to use Tilly. It seems the Ranger was up to the task with you at the helm.

Cool cornstalk photo. We're finally getting a day of rain here. It's very, very welcome.
Getting the tree out was a family project. I would have never thought of your Ranger idea of twisting the tree out. Glad it worked!
Blessings,
Betsy

All well that ends well or Far Guy makes up his mind…it a good title for this adventure. Well, maybe it takes a village! 😂

Whew, that last tug must have felt like a great accomplishment when the tree popped out of the ground. Nap time to follow!

That was a persistent tree that did not want to be moved. Somehow I feel sorry for the tree.

Haha, I've been there, done that! We had a problematic tree just like that and dug and dug and dug around the roots, and chopped and hacked, and still it hung on in there. In the end we had to get the dump truck with a couple of chains to finally remove it.

Good that you finally got that tree pulled out. My son tried something similar and ended up burning out the clutch of his pick up.

You go, Connie!! Woot! I know how hard that can be. I also know my ex was not that smart and ended up breaking the back windshield in our car when he got stubborn and gunned the motor to pull out a stump. Ha!

I could see it! When things like that happen to us, I think "how many people does it take.... ?". I am happy you got that stubborn thing out!