Our oldest daughter Trica is finally divorced, she still struggles with issues that we cannot help her with.  We saw her once this year back in October.

Savannah is very busy with her eyelash extension business and school, she will graduate in 2021 with a degree in Business.   She has two dogs, Chewy and Kalila and Luna her kitty.

Maddie will be starting a new job soon, she is a Dental Assistant, the new job will have great benefits.  She is a very busy Mom to Hey Mikey and Cee Cee.  She and Brenton have a dog named Koda and a couple of cats....Raina and Loki.

Paige is in Dental Hygienist school, she works part time as a bartender and takes care of her very elderly cat Bailey.

Youngest daughter Jen and her husband Andy bought a second house and fixed it up,  it is an Air  B & B rental called Home & Away.   It has a great location just one block from The Ralph (a huge arena).  They are both Instructors at Northland Community and Technical College. They have Little Elvis a Sheltie who is 12 years old and the new puppy Sadie a Golden Retriever.

Adam is going to school, he is not quite sure what he wants to be when he grows up.   He works part time and has a cat named Phoebe that he adopted a year ago.

Hey Mikey was four this year and will be five years old in 2022.

They grow so fast.

My cousin Dean died of a heart attack he was 62 years old.

My cousin's wife Mary Ann died she was 76 years old.

Long time blog friend Mildred died of Pancreatic Cancer she was in her 60's.

Jen's Sheltie Miss Miney died last January, she was 15 years old.  We miss her very much.

Far Guy had four valves placed in his lungs at the University of Minnesota, they were supposed to improve his breathing...they did not work...he had a miserable summer until the valves were removed in August.  He still gets the infusions once a week to help protect his lungs.  He struggles to breathe, some days are better and some are worse.   He wood carves when he feels up to it.   All of his Doctors are now in Grand Forks, North Dakota.

We moved in with Jen and Andy in November to be closer to Far Guy's Doctors for the winter.  Jen and Andy have a very large home, we have an office for our computers, a bedroom and a bathroom.  There is a very large kitchen, living room, craft room, game room and a movie theater!  We will move back to the woods when the weather improves.  We are very thankful for Andy and Jen making the winter easier for us!

I am busy, I have many crafts to occupy my time and this year I learned how to do Mosaic Crochet.

We took Far Guy's old car to several car shows last summer...a 1959 Desoto Firesweep.  It has an appointment at a body shop for some work and a new paint job this winter!   So next summer we are looking forward to a few more car shows.

We were married 52 years just a few days ago. 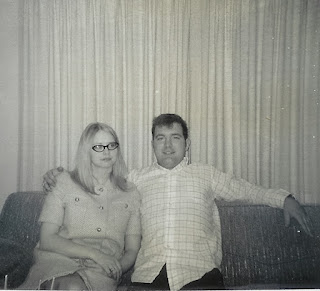 I missed my blog anniversary the other day...14 years...uffda.

Great to have this end of year catchup on how things are going for you and your family. Sounds like really great for the most part. I'm really glad Andy and Jen were able to have you stay with them over the Winter so you could be closer to Far Guy's doctors.

Quite a year for you and FG, lots of commemorations of times gone by, and what a wonderful chronicle of your large family. I hope 2022 brings you all good health.

Happy blogiversary and happy anniversary! What a blessing to be with your daughter for the winter. I'm sure she probably feels less stress at having Far Guy closer to doctors too. Relax and enjoy the rest of the winter.

I didn’t realize you were that far north for the winter: my nephew and his family live in Hallock, MN

Happy New Year to you and Far Guy!

I really enjoyed reading this and seeing what your family has been doing all year. Even though I read your blog daily, it's nice to see it all in one place as a great reminder. You are blessed with an absolutely wonderful family and extended family Connie. I love how you all keep in touch and that Jen and Andy were so happy to have you stay with them and make that stay so comfortable.
Happy New Years Eve my dear friend. Tell Far Guy the same from Dennis and me.
Blessings,
Betsy

Happy anniversary and blogoversary!
Sounds like you have a very good family.

May 2022 be a year of blessings for you and your family. Happy New Year!

Great summary. You had many good things and a few things to be sad about or worry about. Have a great 2022.

That was good to read your year recap, and the joys and sorrows of the year. Nice you could move in with Andy and Jen for the winter for easier doctor access.

What a great recap! I don't know how you remember it all. I think the best thing is you and Far Guy being able to stay with Jen and Andy so you don't have to drive all that way in the winter. So, they live in Grand Forks North Dakota? I thought that was still Minnesota....I better take a class in geography! Enjoy your New Year's Eve! Stay safe and well.

Happy New Year Karen. May you a11 breathe easier.
I moved to b1og: knittinggenes. Come see

Blessings for you and your family in the new year! Prayers for good health.

I enjoyed your year in review. You are blessed with a wonderful family. Congratulations on both your blog anniversary and your wedding anniversary! May you, Far Guy, and the rest of your beautiful family have a blessed and happy new year! I appreciate your friendship!

What a good idea having a year end recap. Joys and sorrows remembered.
Happy New Year to you and Far Guy. Happy anniversary too.

The good and bad review. I was explaining to my oldest son as to how many people we lost this year and i couldn't remember then all. Your review always includes the pets and that is fun. I wish you a great New Year's Eve and a great and happy new year. Keep on blogging and keep in touch.

I guess my year end wrap up was in my Christmas letter. I enjoyed reading yours very much, the ups and downs of life.

What a wonderful recap. I am so happy you get to spend the winter with Jen and Andy. Sounds like you get to stay busy !

Was a busy year. Glad you are close to FarGuy's doctors this winter (and that you have dogs for company, too). It's been awful cold and snowy for traveling. Curious--do they have some good craft and yarn stores in Grand Forks?

Sure enjoyed reading this. It's amazing how you remember and keep up with it all. I can hardly remember what happened yesterday. :) You have a bunch of good grandchildren. I finally got to see all of mine together last Tuesday. It was nice...even the three great grandchildren were there. Happy New Year to you and Far Guy.

Hobby Lobby, Michaels, Joanns that I have found so far:)

Love your picture and all the updates Happy New Year. God Bless You All.

Happy blogiversary, Far Side!!! Every day for 14 years is impressive!

(P.S. I think I finally figured out how to hack in to make comments. Yay. Not sure what the problem was...)

It is amazing how much can happen in one year. I hope 2022 will be a happy one for you and hubby and all the family.
And Happy Wedding Anniversary! :) xx

What a year its been

That was quite a year. Here's to a better new one!