We had a blizzard here, the snow total was about 8 1/2 inches.   It blew around some here in town, I can only imagine what it was like out in the country...a white out for sure. 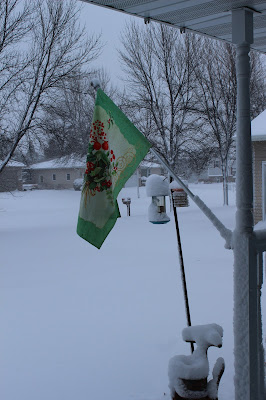 I took this photo in the morning before it was done snowing.  It was interesting to watch the neighbors deal with their snow, the little kids and the Black Lab Nova had lots of fun in the backyard while the parents shoveled and snow blowed.   A lady across the street shoveled for a long time and then someone showed up with a snow blower.  Andy went out several times to move snow out front and out back.  He has a snow blower also.

Far Guy's sister was released from the hospital after tests showed that the subdural hematoma was not growing.   She is supposed to take it easy for awhile.  They have no idea what caused it, she did not fall or hit her head.  She will have more tests from time to time to make sure it isn't getting larger.  From what I read it can take months for the blood to be reabsorbed into the body.

We had a quiet Sunday, in the afternoon we watched a movie called Red Notice I can only give it a 3 out of 10 stars because I fell asleep...