My CAL Winter Wonderland is slow going and will be even slower going because I have some other projects in the works...a couple of Christmas gifts and a try at some mittens. 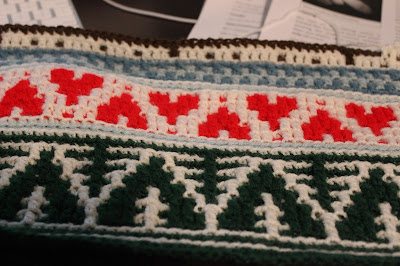 I have trees, hearts and a ribbon done, the brown and white is the beginnings of reindeer.

I dropped Far Guy off for his infusion yesterday and then I went to Hobby Lobby, who doesn't like an hour there!   I may go again next week.

Far Guy is what is known as a difficult stick...it took four tries to get an IV in him...he was not happy.  His record is seven.  Here they only let the nurses have two tries and then they call a different nurse...he said he could meet lots of nurses that way.  The chair was hard...it made his butt hurt he forgot his puzzle book...it was a rotten morning for him.  But they brought him coffee.

Sorry Far Guy had a hard time getting the infusion. I hope the rest of his day was better. Yes, Hobby Lobby is fun to browse. Always something new and different.

I had that happen one time when I was in a hospital. Ohhhhh yup it is not a happy situation when they can't stick you.
I gather the nurses will figure out a routine with FG. Next time? A butt pillow and a puzzle book?

Stay well. We are supposed to have a good storm finally!

So sorry to learn of FG's difficult day. Your Crochet project sure looks good, though.

Oh no, poor Far Guy!! That is a rotten morning. I imagine his arm is black & blue. I know mine is re-poking happens.

Your CAL is pretty & so detailed! I can't even imagine how the shapes are made. It is going to keep you busy for sure.

I'm sorry Far Guy. I a ma difficult stick, too. They get their hopes up because my skin is see-through. You can see every single vein and my arms look like a highway map. I warn them in case they would like to start with the department's expert. When I went for recent lab work, they asked if I would mind if a student tried. That was fun. She did get a vein in arm one finally, but the inside of my elbow was purple for over a week. And it took forever and ever to fill the vials. The worst is when I need an iv and we have to finally give up on the arms and go for the wrists. I always wish my daughter lived locally. She is one of those nurses they call from another department. She can put them in like a super hero.

I've never had an IV, but I nurses always had trouble taking blood from my left arm. (The nurses were always sitting on my left, so that's the arm I offered up) I'd come home with a horrible bruise by the time they were done. That is until one day, I was wearing a tank top, and the new nurse looked at my right arm an said "OMG - look at that big beautiful vein - give me that arm!" Now I make sure they take it from the right, and I have no more problems!

Oh man! Far Guy doesn't need to meet THAT many nurses! Your Winter Wonderland is beautiful!!! So glad you have a dog where you are - that eases a lot of problems.

That looks so pretty already! An hour in Hobby Lobby - that could be very expensive for me. I took one of my granddaughters with me once and she obviously has the same love for browsing in there that I do.

For some reason, my oldest just picked up crocheting recently. Thus far, she has only made animals. Santa may bring her a box of yarn on Christmas day.

I've never been stuck more than once and they always comment on how easy it is to find my veins. I guess that makes me an easy stick.

I've only had one problem with the IV and that was enough so I sympathize with Far Guy.

His infusion experience sounds painful in many ways. Hopefully someone at the clinic figures it out.

The mosaic crochet is so lovely. Maybe one day I'll try to figure it out. For now I'm sticking to small and easy projects.

Thinking of Far Guy…life is difficult so enjoy all you can.

I love your new CAL, it's beautiful. You can easily spend an hour...or two in Hobby Lobby can't you? I sure can.
I'm sorry about Far Guy's morning. Hopefully once they get to know him well, it will be easier for him. I'm a very difficult stick. One time it took 13 trys! I was passed from nurse to nurse until one finally got it.
I hope they find someone for Far Guy that will learn where the best place is to poke him.
Blessings and big hugs,
Betsy

Your crochet work is so beautiful. Although I've crocheted for over 50 years, I've never done mosaic crochet. I am looking up beginners guides online for when my mind has some spare time. I'm sorry your Far Guy has those issues; I am not an easy stick but I don't need IVs all that often. I hope the infusion center can make this easier for him. Alana ramblinwitham.blogspot.com

Oh, your Winter Wonderland is beautiful and I love your color scheme! Thanks for the picture so I can look at yours and see if I'm doing mine right. I have to finish the ornaments but then I can go back to WW.
Lucky you to have all the advantages of "the big city"...what fun! I'm so sorry Far Guy had a rough morning. I finally had to put an old pillow on my office chair because my rear end was hurting too. I could have sworn I had enough padding in my butt! LOL!

The coffee helps. A wander in Hobby Lobby YES!!!

What a rotten way to meet nurses! :( When I was so dehydrated in the hospital I ended up with several pokes in the arm by two people to get a vein because they did not know how to use the port for an IV. Was very bruised up for a while. I can empathize. So sorry he has to put up with that almost every week. Sucks! And hurts! I sure hope they get a talented nurse next time.

Love the look of your blanket. Or is it a blanket?

Limiting nurses to two tries with the IV is a good idea. Poor Far Guy. I imagine he dreads going for his infusion.

Poor far guy ...... hope things go much better next week. I love the project you're working on....so beautiful....can't wait to see the reindeer! You're right.....how fun it is to wander around Hobby Lobby. I haven't been to one in ages. I'm overdue! Take care you two!

I quit donating blood because they couldn't seem to get the needle in correctly. Hold the hand on it to bend it into position doesn't work for me. The third try at different years I decided my veins were meant for blood donation. I donated platelets in Houston years ago and had no trouble but now I won't offer. I think it is sad that you have to bring you own cushion but I thing Far Guy should do that.

Awww, I feel bad about Far Guy's experiences with needles. I hope the nurses start having the best nurses do his from the start.

I love your crochet work. I've never seen anything like it in crochet.

I have terrible veins, like my dad, it is frustrating and can be painful