My word for the year was time.

Time to go through and sort "stuff".   I continued on where I was a week ago before I was struck down by the cold from Snotsville USA.  Yesterday I got through the Christmas sort that I left in a big mess...I worried about that...if the cold from Snotsville ended in my demise my youngest daughter would have to deal with it and she would be very unhappy.  All no longer used Christmas items were marked and packaged for sale.   I sorted through another misc tote that I had up there...and began a craft sort.  At least you can walk through the back storage area now..  Sorting will continue.

I have to admit I opened a few drawers up there...peered in and quickly shut them again.  Maybe in a few days...

When we had a snow over Christmas my favorite and only son in law Andy got out the snowblower that I cannot start by myself.   It started for him and he moved a bunch of snow.   Then we had a big snow and people were looking for used snowblowers.  I took a photo and within a few minutes it was sold on Marketplace.  Then other fellows offered me more money if I would sell it to them...of course I didn't...and the snowblower left the next morning.   I am just happy to be rid of the hunk of junk that I could not start....we originally bought it because it had an electric start...well that worked a time or two...and was replaced several times and still did not work more than a time maybe two.

So it was the right TIME to get top dollar for an old snowblower with a broken electric start!

Flowers from Miami...no I did not go there...but blog reader Kay did! 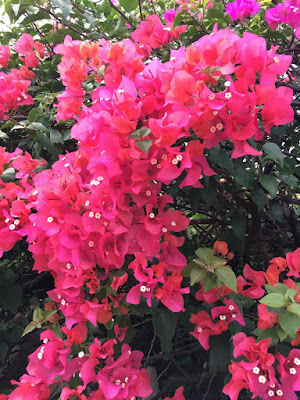 Labels: Spring House cleaning in the winter, The Big Sort.