We went to town for supplies!  Far Guy went to Pulmonary Therapy and I ran errands.   He did quite well at therapy but pushed himself a bit too much...he spent the afternoon watching TV and resting.

I had an interesting conversation with a fellow in the furnace filter aisle.  Far Guy instructed me to get the cheap green furnace filters because the expensive white ones restrict the airflow too much and it is hard on furnaces.   Anyways this fellow said  "my furnace quit over the weekend, had to have a service call ($298) just to have them tell me I needed to use different filters...the white filters restrict the airflow too much."  Lesson learned.  I told him of my husbands instructions and the reply was "Smart man!"

I still have a Power Shovel to move snow.  It is electric, I just plug it in and push it around and it throws snow for me.  No pulling on ropes, no pouring gasoline.    I love it! 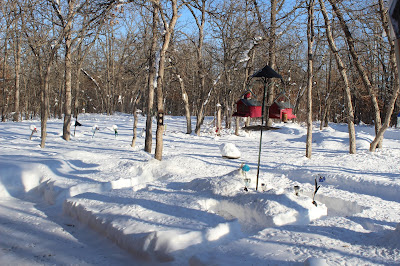 I can clear the walkway and the patio and paths to the bird feeders.   I also have several shovels...one by the garage and one by the house...they work too!   I shovel for a bit and lean for a bit. 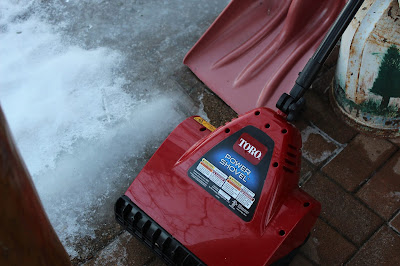 Here is a photo of my Power Shovel....best invention since sliced bread.  It throws snow 12 plus feet ...good enough for me.

I have not been compensated in anyway, but if Toro wants to send me another Power Shovel I would certainly take it!

This month is about half done....we are headed back into the deep freeze later this week.